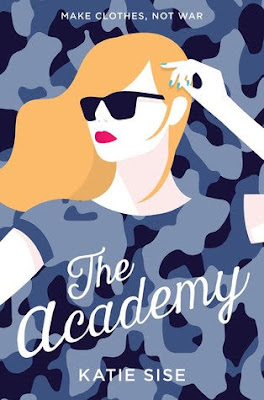 
Frankie Brooks knows what she wants in life: to become the world’s next great fashion editor. All she needs to do is get into the elite American Fashion Academy in New York City. If she gets in, her life plans will be going right on schedule. Anna Wintour, watch out.

But after Frankie messes up one too many times—hey, it’s hard keeping up with classwork and an acclaimed fashion blog—her parents come up with entirely different plans for her future: Military school. How is Frankie, the least athletic person in the world, who knows absolutely nothing about the military, going to survive a whole semester at the famed—and feared—Academy?

With students who seem to be totally uninterested in her, a course-load that’s even more difficult than at her old school, and the weird athletic War Games competition Frankie has to join—her life is way harder than it used to be. And no one, including her roommate Joni, seems to understand Frankie at all.

As she learns how to cope in about a million drills, a hundred different specialized classes, and is maybe even falling for super-hot and super-smart cadet Jack Wattson, can Frankie prove to everyone that being a fashionista doesn’t mean she can’t succeed? - from Goodreads

After cheating on a chemistry test and throwing a party while her parents were away, Frankie's parents decide that military school would be a good place for her to learn some discipline and get her grades back on track.  Frankie, however, would rather work on her fashion blog and is appalled at her new situation.

For most of the book, Frankie is the most unlikable character.  She is at times snobby, snotty, disrespectful, immature, and materialistic.  The only thing she seems to care about is her fashion blog, which she mentions at every chance she gets.  I had to keep reminding myself that she's only 16, and that kind of comes with the territory.  But when she is answering her phone during training and telling her lieutenant she can't wear her uniform because she already has a "fashion moment" picked out, it was a struggle.

At least, though, Frankie could recognize when she was being snotty and disrespectful; she just couldn't seem to control herself.  However, as the book goes on, Frankie gets some extra incentive to keep her grades up and try to make the best of her situation.  I liked that she remembered how amazing it felt to be a good student, before her fashion blog took over, and she wanted those feelings of pride and accomplishment again.

The military academy was a really unique setting.  I enjoyed learning about its structure and classes.  It really seemed like a good place for Frankie to learn discipline and teamwork.  The secondary characters also brought a lot of heart to the book, although I could have used less of the romance plotline with fellow student Jack.  I really just wanted Frankie to focus and grow.  There was a lot of diversity among the students, and it was interesting to learn how they all ended up at this school.

Overall, I thought the book was well-written and the author did a good job in capturing the 16-year-old main character, but I wanted a bit more depth in the story.