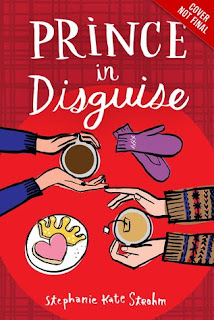 When Dylan's sister Dusty becomes engaged to a Scottish lord on a reality show, the whole family finds themselves traveling to Scotland to prepare for the wedding.  For shy and awkward Dylan, being followed around by cameras is a nightmare, especially with a blossoming romance and family issues coming to the forefront.

I enjoyed this book so much; I couldn't put it down and finished it in a day!  I loved the royalty aspect; I loved the reality tv aspect; I loved the Scottish setting.  Everything worked!  The pacing of the story was perfect.  There were never any dull moments.  Dylan was an adorable main character.  She just wants to live her life and appear as little as possible on the show.  She and groomsman Jamie were so cute together; I loved their witty banter and how comfortable they seemed around each other, almost right away.  I was a bit wary of Jamie in the beginning, because he seemed a little cagey and too good to be true.  I mean, the producers of the show messed around with other storylines, so why not this one?  But by the end, I understood Jamie and fell in love with him even more, especially because of his love of reading.    4.5 stars 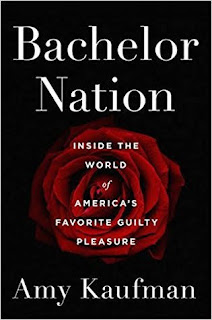 Bachelor Nation: Inside the World of America's Favorite Guilty Pleasure by Amy Kaufman (2018)

Confession: I love reality TV, but I don't watch The Bachelor.  However, I do read a lot of articles about it and I'll kind of keep up with it online as the season goes on.  And I'm a sucker for anything "behind-the-scenes"!

I wouldn't say that anything Kaufman revealed in this book surprised me too much, but it was still kind of shocking.  The producers and casting directors are very calculating, choosing cast members to fill particular roles.  Reading about how the contestants are manipulated and treated during the show made me never want to be on a reality show.  The contestants aren't allowed to watch TV or even read books during their time in the mansion, and there's alcohol everywhere.  Producers practically force contestants to say certain things, like they're in love with the bachelor or bachelorette even if they aren't.  The short timeline, the overly-romantic dates - this isn't how dating works in the real world, yet millions of us tune in every week, and we expect a proposal.  I could have done without the chapter on the history of TV dating shows and perhaps a little less on how contestants try to capitalize on their newfound fame after the show, but I did appreciate the research Kaufman put into the book.  I guess in the end maybe I wanted a little more, but I think other fans of reality TV will enjoy this behind-the-scenes look at one of the country's most popular and enduring shows.  4 stars
Posted by Angela at 5:00 AM