5 Takeaways From "The Year of Less" 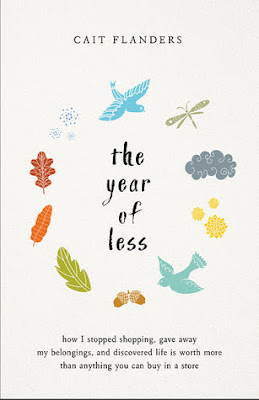 The Year of Less: How I Stopped Shopping, Gave Away My Belongings, and Discovered Life is Worth More Than Anything You Can Buy in a Store
Cait Flanders
Published January 16, 2018


In her late twenties, Cait Flanders found herself stuck in the consumerism cycle that grips so many of us: earn more, buy more, want more, rinse, repeat. Even after she worked her way out of nearly $30,000 of consumer debt, her old habits took hold again. When she realized that nothing she was doing or buying was making her happy—only keeping her from meeting her goals—she decided to set herself a challenge: she would not shop for an entire year.

The Year of Less documents Cait’s life for twelve months during which she bought only consumables: groceries, toiletries, gas for her car. Along the way, she challenged herself to consume less of many other things besides shopping. She decluttered her apartment and got rid of 70 percent of her belongings; learned how to fix things rather than throw them away; researched the zero waste movement; and completed a television ban. At every stage, she learned that the less she consumed, the more fulfilled she felt.

The challenge became a lifeline when, in the course of the year, Cait found herself in situations that turned her life upside down. In the face of hardship, she realized why she had always turned to shopping, alcohol, and food—and what it had cost her. Unable to reach for any of her usual vices, she changed habits she’d spent years perfecting and discovered what truly mattered to her.

Blending Cait’s compelling story with inspiring insight and practical guidance, The Year of Less will leave you questioning what you’re holding on to in your own life—and, quite possibly, lead you to find your own path of less. - from Goodreads

I don't think I have a shopping problem, but always in the back of my mind, there's a little thought of, how can I spend less?  Do I really need all of this stuff in my house?  So when I heard about Cait Flanders' Year of Less, I was intrigued.

At the beginning of the book, Cait Flanders lays out her plan for a shopping ban, making a list of approved and non-approved items.  She also declutters her home, listing what she gets rid of.  Each chapter focuses on a month of the challenge, but after the initial plan, the book becomes more of a memoir and less of a how-to book.  She talks about her sobriety; her parents' divorce and how it affected her; and her plan to quit her job.  I thoroughly enjoyed Cait's writing; it has a great flow and is very personal and approachable without being preachy.  She isn't trying to tell people that they have to do things her way in order to succeed; you can take her ideas and tweak them to fit your lifestyle.

After finishing the book, there are a few things that stuck with me that I hope will help me moving forward.

1. How many clothes does one person really need?  When Cait began weeding through her clothes, she realized that she really only liked and wore very few outfits.  So - get rid of those clothes you feel uncomfortable in; the clothes that don't fit you just right; the clothes you're holding onto for when your weight fluctuates; and pieces that aren't very versatile.  I wear business casual all week to work, so do I really need 5 or 6 pairs of jeans when I only wear them on the weekends?

2. Analyze your mood before you make that purchase.  One of Cait's shopping triggers was trying to make herself feel better or feel less pain.  She says, "I found myself constantly wanting to do anything at all that might brighten my day, or lighten some of the load I was carrying around with me."  She usually did that through buying something.  But although that might help temporarily, was it really solving anything?  I know when I'm sad, I immediately want to spend money, go shopping, whatever.  But now I can take a step back and really ask myself why I want to make that purchase.  Is it to make me feel better now, or for the long haul?

3. Set priorities.  So many of us complain that we want to travel but don't have the money for it.  If we really took a look at our finances and what we're spending our money on, I bet we could all find things we're wasting money on that we could funnel towards travel (or something else we want to do).  I like to go on trips, even short ones, so saving for that is a priority for me.  When I get my first paycheck of the month, I automatically transfer a certain amount of money into an account dedicated to travel expenses.

4. Never stop learning.   Cait realizes during her year-long shopping ban that she could actually save a lot of money if she had more skills.  She regrets not learning more from her parents when she was younger, like asking her mom how to sew or learning how to change her car's oil from her dad.  For many of us, it's just easier and more convenient to pay someone else to do things like this for us.  Maybe if I had paid more attention to my mom in the kitchen, I'd be a better cook and not rely on take-out so much!  But, it's never to late to learn a new skill, whether it's sewing, or gardening, or whatever!

5. Are you buying for the person you are or the person you'd like yourself to be?  Am I buying this shirt because it's trendy and I see everyone else wearing it and I want to be fashionable, or because it's my style and something I truly like?  Am I buying this book because I think I'll actually enjoy it or because I think I should be reading it?  While I agree with Cait that you should accept yourself for who you are, I think a case could also be made for wanting to try new things or better yourself.  I'm not saying to do this all the time, but some things you just won't know until you try them for the first time.  Like, I want to be a craftier person.  I was artistic as a kid, but not so much now.  I think it's ok to start with one small project; it's not ok to buy every crafting supply in the story and then never use it.

Overall, I think this book had a great message to be more mindful, in every area of our lives.
Posted by Angela at 5:00 AM