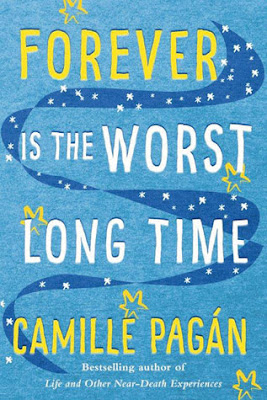 
When struggling novelist James Hernandez meets poet Louisa “Lou” Bell, he’s sure he’s just found the love of his life. There’s just one problem: she’s engaged to his oldest friend, Rob. So James toasts their union and swallows his desire.

As the years pass, James’s dreams always seem just out of reach—he can’t finish that novel, can’t mend his relationship with his father, can’t fully commit to a romantic relationship. He just can’t move on. But after betrayal fractures Lou’s once-solid marriage, she turns to James for comfort.

When Lou and James act on their long-standing mutual attraction, the consequences are more heartbreaking—and miraculous—than either of them could have ever anticipated. Then life throws James one more curveball, and he, Rob, and Lou are forced to come to terms with the unexpected ways in which love and loss are intertwined. - from Goodreads

When James meets his best friend Rob's fiancée Lou for the first time, he knows two things - Lou is completely wrong for Rob, and James is in love with her.  But he ignores those feelings, and only sees Lou occasionally over the next several years.  When Rob and Lou eventually split up, James sees the chance he always wanted - but the consequences are nothing he could have ever foreseen.

I have to admit, it took me a little while to get into this book.  I didn't particularly like James, the main character.  He is kind of pretentious, yet he doesn't have a lot to show for it.  He's not a very good teacher; his plans for a novel stall again and again; and he can't commit to his girlfriend because Lou is always in the back of his mind.  I didn't like that he was holding onto this idealized image of Lou in his head, to the detriment of everything else in his life.  Sometimes it seemed like he was happy when Rob called and complained of problems in his marriage.  And I never really understood what he saw in Lou - she didn't feel like a fully developed character to me.

However, as the book went on, I started to come around on James, particularly after he and Lou spend one night together.  I thought maybe now James could either move on, or be with her, or something, but the story ended up taking a turn I didn't expect and I just felt for him.  I wanted him to finally find happiness, but things aren't that simple.

The book is told from James' POV as he is telling the story to someone else, and when I found out who he was writing the story for and why, my heart just broke.  The story is told over many years, and I definitely liked the later years better than the beginning.  I think I tend to read female-centric stories, so the fact that the MC is a male in this one was a change for me, but I enjoyed it.  I liked the writing and the way the author had the MC telling the story was successful.