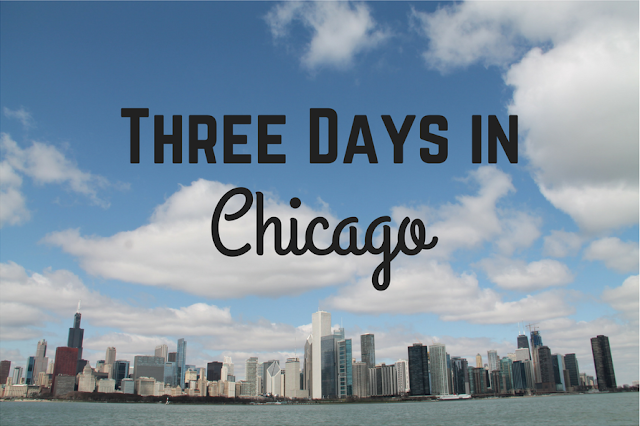 Last month, we took a trip to Tulsa, Oklahoma, to celebrate our nephew's first birthday.  We decided to extend our trip and stop in Chicago for a couple days on the way back.  I'd never been there before, and Tom wanted to see his sister and niece, who live just outside the city.  One of my brothers and his wife also lived there for a couple years, so we got some great suggestions from them.

Day 1: We arrived on a rainy Sunday morning and Tom's sister and niece picked us up at the airport.  We drove out to Shedd Aquarium first.  I had looked into getting the City Pass before we left, but didn't buy it because I wasn't sure we'd have enough time to really get our money's worth out of it (the $106.00 pass gives you fast pass/express entry for 5 attractions from a choice of 7).  When we saw that entry into the aquarium was $40.00 by itself, we decided to get the City Pass (and we ended up using every ticket in it, so we saved a TON of money).  Shedd Aquarium was fun, and they even have a dolphin show right inside the building.

After that, we walked across the Museum Campus to the Field Museum.  This enormous museum boasts a ton of science and history exhibits, from Egyptian mummies to animals to gemstones.  They also have the largest and most complete T. rex skeleton, but unfortunately SUE is not currently on display. 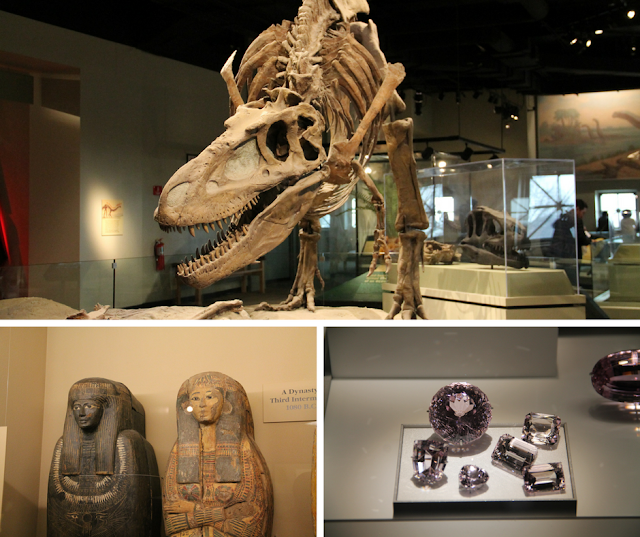 After spending a couple hours at the Field Museum, we checked into our hotel in the theater district and then went out to dinner with Tom's family.  We went to Portillo's and tried some Chicago-style hot dogs.

Day 2: Even though it was mid-April, it snowed all day.  We walked to Cloud Gate ("the bean") early before the crowds got there and got some fun pictures with the iconic sculpture.  Since the Art Institute of Chicago didn't open until 10:30am, we walked around a bit more in the chilly weather, through Millennium Park and down to Buckingham Fountain (which wasn't turned on yet for the season).  Then we spent a couple hours at the Art Institute, which had a fabulous collection; some fun, recognizable pieces with a lot of other things we hadn't seen before. 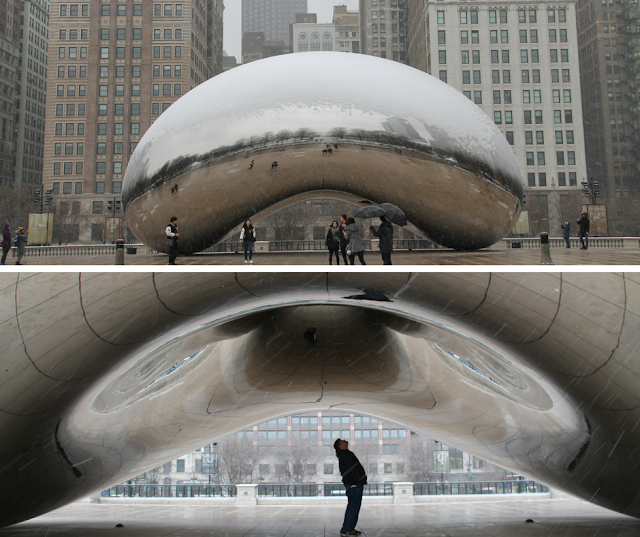 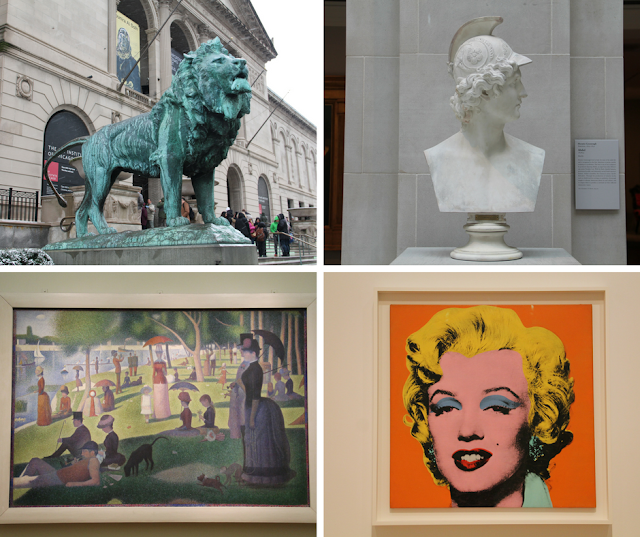 We had lunch at the Italian Village, Chicago's oldest Italian restaurant, which is actually three separate spaces, each with a different feel.  We ate upstairs, and it was really good!

After lunch, we walked down to the Willis Tower (formerly known as the Sears Tower) and went up to the Skydeck on the 103rd floor.  From here, you can see views of 4 states and also try out the Ledge, which are a series of 4 glass boxes extending out from the Skydeck. 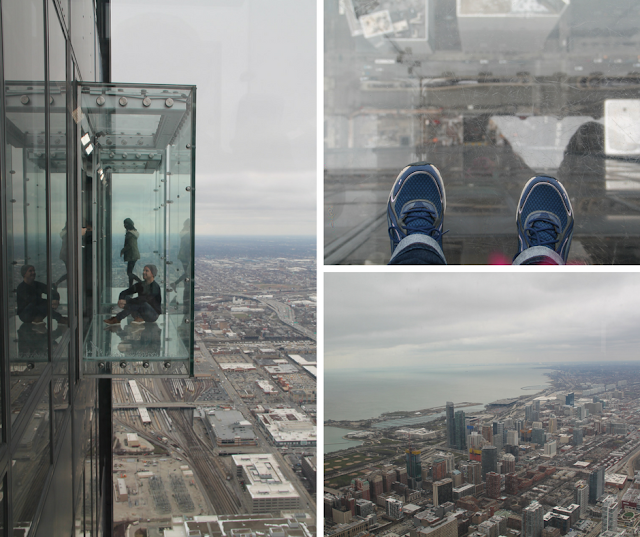 For dinner, we had to try some deep dish pizza at Lou Malnati's - so yummy!!

Day 3: On Tuesday, the sun finally came out, although it was still pretty cold.  We started our morning with a lake and river architectural tour with Wendella's.  They also have an architectural tour that just focuses on the river, but my brother and SIL suggested we go out on Lake Michigan if we could because we would get great views of the city skyline, and they were totally right! 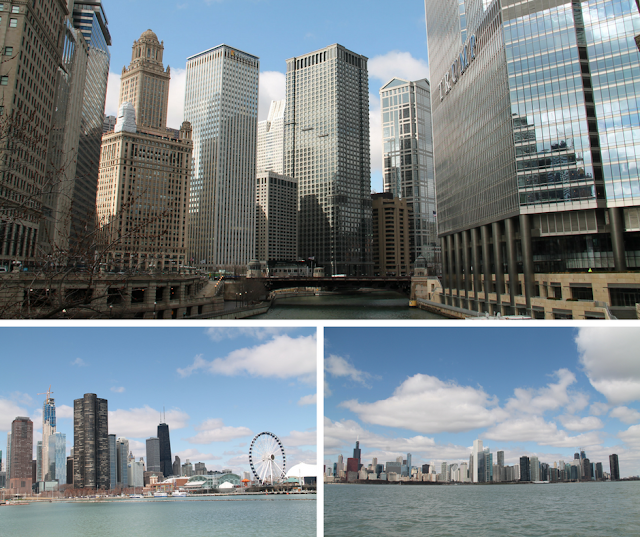 We then walked up the Magnificent Mile, which is a stretch of North Michigan Avenue that has tons of high-end stores and restaurants, to the John Hancock Observatory.  We went up to the 93rd floor and saw some amazing views.  Yes, we did both the Hancock and Willis Towers, but the views were actually pretty different, so I'm glad we did both.

After that, we walked to the Lincoln Park Zoo, which is open every day and it's FREE!  I think because of the weather, lots of the animals were hiding and staying warm, but it was still a beautiful place.  We also visited the Lincoln Park Conservatory, where it finally felt like spring and smelled so lovely.  For our last night, we had dinner at the Berghoff, a Chicago institution where we had some delicious German food.  We got one last treat at Garrett Popcorn, known for its mix of caramel and cheddar popcorn (will definitely be ordering more of that soon!). 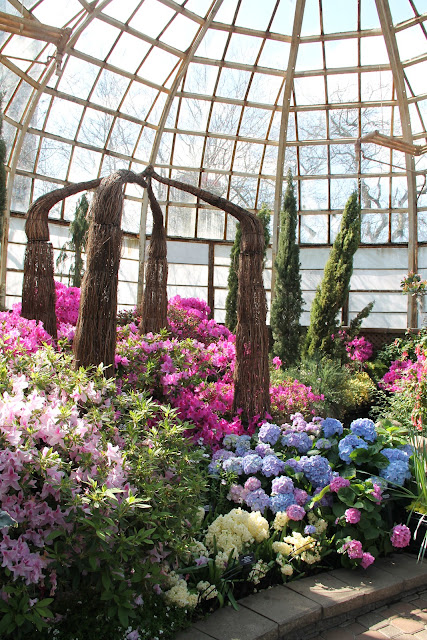 We packed a lot into three days, but we had a blast in Chicago and I could definitely see us going back someday!


Have you ever been to Chicago?  What was your favorite attraction or thing to eat?
﻿
Posted by Angela at 5:00 AM