Book vs. Movie: Ready Player One 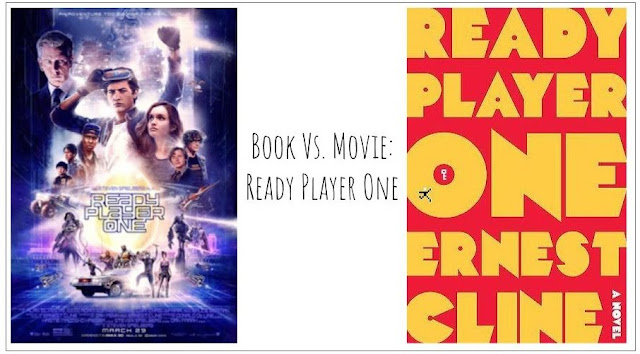 Ready Player One is one of those books I found out about after I started blogging and saw a lot of other people raving about.  For some reason, I kept putting off reading it, and then I saw that the movie was coming out.  My husband was excited for it, because of the pop culture references and video game culture, and so the book went higher up my TBR, with the intention of reading it before the movie was released.  I guess a lot of people had the same idea I did, because when I went to get the book from my library, there was a HUGE wait list - so long I didn't get a chance to read the book before the movie.  Minor spoilers below!

Ready Player One takes place in the not-too-distant future, a bleak place where people turn to the OASIS, a virtual reality game, to fulfill themselves.  The game's creator, James Halliday, announces in his will that he left an Easter egg inside the game, and the first person to find it will gain control of the OASIS and his vast fortune.  Wade Watts is a teenager who is on his way to winning it all after he finds the first key to the Easter egg, but a large corporation, Innovative Online Industries, is using all of its resources in order to get there first. 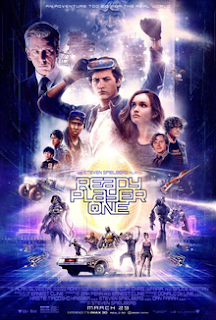 We saw the movie the first weekend it came out, and it was definitely a fun experience!  The music was awesome, all those '80s hits!  Who doesn't love '80s music?  Visually, the movie was gorgeous - the OASIS seemed like such a lush place where practically anything could happen.  I see why people spent so much time in there. And of course, all the pop culture references were very cool.  Whether they were front and center, like the Iron Giant, or hiding in the background, it was fun trying to spot them all.

As much as I enjoyed the OASIS, the scenes that took place in real life were just as important.  I did have a little bit of an issue with some of the secondary characters on Wade's team - I feel like we didn't get to know them as much, and since they were such fun characters in the movie, I wanted more of them.  But overall, I really enjoyed the movie - it was a good mix of action and heartfelt scenes. 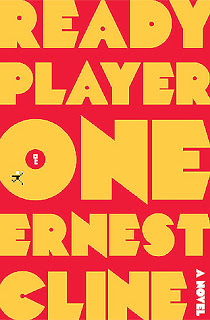 When I finally got a copy of the book, I dove right in.  The first thing I noticed was the incredible amount of detail.  Cline's world-building was amazing.  I almost felt like James Halliday was a real person, I got to know him so well through Wade.  At times, that amount of information felt overwhelming, especially the sections that got overly technical on computer or gaming things, but it made the book feel so authentic.

I generally thought the pacing was good, but there were times it felt off.  Sometimes it took awhile for Wade to figure out each challenge, and then within a few paragraphs, other players would catch up or even surpass him, with little warning or description.  While I liked Wade and thought he was resourceful and smart, even cunning at times, it was a bit hard to believe how much knowledge he actually had.  I mean, I guess he literally spent years watching and playing basically every tv show, movie, and game from the 1980s, but the fact that he had pretty much everything memorized was crazy.  I did appreciate, though, that the secondary characters were fleshed out, and Ogden was a pretty cool character, as well.

It's hard not to notice the big differences between the book and the movie.  Obviously, the general premise is the same, but the challenges were very different (although it makes sense that the filmmakers would have to scale them down for the movie).  The secondary characters also played slightly different roles.  I thought the book did a great job in creating the OASIS and helping me visualize it, but actually seeing the world on the big screen really brought it to life.  I would recommend both!


Have you seen the movie and/or read the book?  What did you think of the differences between them?
﻿
Posted by Angela at 5:00 AM