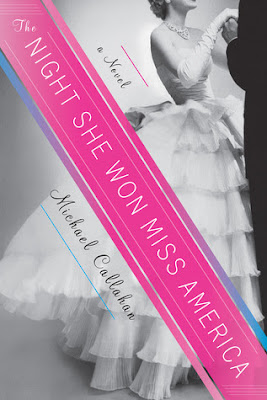 
Inspired by a true story, a young woman is swept up in the glamour and excitement of chasing the title of Miss America 1950—only to vanish the night she wins.

Betty Jane Welch reluctantly enters the Miss Delaware contest to make her mother happy, only to surprisingly find herself the judges' choice. Just like that, she's catapulted into the big time, the Miss America Pageant in Atlantic City.

Luckily, her pageant-approved escort for the week is the dashing but mercurial Griffin McAllister, and she falls for him hard. But when the spirited Betty unexpectedly wins the crown and sash, she finds she may lose what she wants most: Griff's love. To keep him, she recklessly agrees to run away together. From the flashy carnival of the Boardwalk to the shadowy streets of Manhattan to a cliffside mansion in gilded Newport, the chase is on as the cops and a scrappy reporter secretly in love with the beauty queen threaten to unravel everything-and expose Griff's darkest secret. - from Goodreads

This was one of those impulse grabs from the library new release shelf.  I didn't know anything about the book, hadn't checked out any reviews, but I thought the cover was adorable and the blurb was interesting, so I took it home.

In 1949, Betty Jane enters the Miss Delaware pageant as a favor to her mother, not expecting she would ever win - but she does, and she is swept off to the Miss America pageant.  There, she meets her escort for the week, Griff McAllister, and the two fall head over heels in love.  However, Griff tells Betty that if she were to win, he couldn't be with her; it would be too stressful for him.  When Betty unexpectedly wins, she has to make the choice between being Miss America and being Griff's girlfriend, and she chooses Griff - but was it the right choice?

I really enjoyed the first half of the story, up to when Betty wins the pageant.  The behind-the-scenes pageant tidbits and mid-century Atlantic City setting were fun.  After Betty runs away with Griff, the story got quite a bit more outlandish.  With stops in New York City and Newport, car chases, and an attempted rape, it felt like a soap opera.

At times it was hard to pin down Betty Jane as a character.  She seemed like a typical young woman, a college student who hasn't led the most interesting of lives.  When she meets Griff, she falls hard, and as a girl who hasn't had many boyfriends before, she loves the attention Griff gives her.  When she ultimately wins the Miss America title, Betty Jane vacillates practically every page.  Although the win isn't something she wanted, she begins to see all the possibilities and advantages it could bring, not to mention all the scholarship money, but she is worried about Griff.  To his credit, Griff never asks Betty to give up her title; she does that all on her own.  As the story goes on, she shows a cunning level-headedness that I didn't expect from her.

Griff, although charming at times, is hiding a big secret from Betty.  Maybe it's a bit of a spoiler, but Griff has schizophrenia, and by the time Betty learns the truth, it's too late; she's in too deep to just leave.  Griff's schizophrenia was a somewhat heartbreaking addition to the story, but the touches upon treatment and prognosis of mental illness in the 1940s were rather interesting.

Overall, I thought this story was engaging and quick-moving, although a bit inconsistent.