Nonfiction Review: Death In The Air 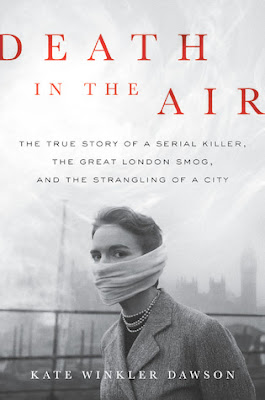 Death in the Air: The True Story of a Serial Killer, the Great London Smog, and the Strangling of a City
Kate Winkler Dawson
Published October 17, 2017


London was still recovering from the devastation of World War II when another disaster hit: for five long days in December 1952, a killer smog held the city firmly in its grip and refused to let go. Day became night, mass transit ground to a halt, criminals roamed the streets, and some 12,000 people died from the poisonous air. But in the chaotic aftermath, another killer was stalking the streets, using the fog as a cloak for his crimes.

All across London, women were going missing-poor women, forgotten women. Their disappearances caused little alarm, but each of them had one thing in common: they had the misfortune of meeting a quiet, unassuming man, John Reginald Christie, who invited them back to his decrepit Notting Hill flat during that dark winter. They never left.

The eventual arrest of the "Beast of Rillington Place" caused a media frenzy: were there more bodies buried in the walls, under the floorboards, in the back garden of this house of horrors? Was it the fog that had caused Christie to suddenly snap? And what role had he played in the notorious double murder that had happened in that same apartment building not three years before-a murder for which another, possibly innocent, man was sent to the gallows?

The Great Smog of 1952 remains the deadliest air pollution disaster in world history, and John Reginald Christie is still one of the most unfathomable serial killers of modern times. Journalist Kate Winkler Dawson braids these strands together into a taut, compulsively readable truecrime thriller about a man who changed the fate of the death penalty in the UK, and an environmental catastrophe with implications that still echo today. - from Goodreads

When I was watching season 1 of The Crown on Netflix, a whole episode was devoted to the deadly smog that covered London in December 1952.  It piqued my interest, and I knew I had to read this book.  In Death in the Air, Dawson weaves two stories together: how the smog affected the city and how a serial killer became a media sensation in the months following the dissipation of the smog.

Dawson starts the book by talking about some of the social, political, and meteorological factors that contributed to the smog.  London was still recovering from World War II and cheap, dirty coal was in abundance.  Fog wasn't an uncommon occurrence in London, but this smog was much worse than previous fogs, filled with dangerous chemicals and held in place for days.  The weather was also colder than normal, which meant people were burning more coal, contributing further to the deadly conditions.

Dawson mainly focuses on an overall picture of the smog and its effects, but she chooses some individuals to focus on, which gave a more personal feel to the story: a police officer, a young girl who loses her father, and a politician who is outraged after the smog finally lifts.  Dawson also provides an overview of the government's reaction (or lack thereof) to the smog.  It was pretty appalling that the deadly phenomenon wasn't at the top of their list, considering literally thousands of people died during and in the months following the smog.  Unfortunately, the government's slow reaction wasn't surprising to me.

The second part of the book focuses on serial killer John Reginald Christie, a creepy and depraved man who was physically (and probably mentally) ill.  He murdered his wife and hid the bodies of several other victims on his property.  The tie between the smog and Christie was a bit tenuous at times, as Christie didn't commit the murders during the fog, but the way his trial dominated the media afterwards was fascinating.  His conviction also changed the course of the death penalty in England.  The timeline of Christie's story was sometimes confusing, flashing back to murders and other events that happening before the smog.

I enjoyed Dawson's writing style; it was straightforward and easy to read, reminiscent of nonfiction author Erik Larson (if you've read The Devil in the White City, you'll probably find a lot of similarities).