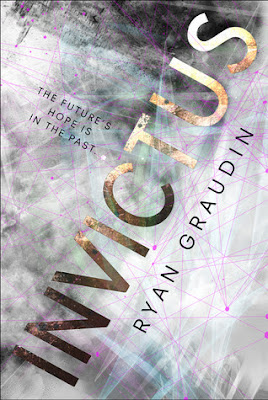 
Time flies when you're plundering history.

Farway Gaius McCarthy was born outside of time. The son of a time-traveling Recorder from 2354 AD and a gladiator living in Rome in 95 AD, Far's birth defies the laws of nature. Exploring history himself is all he's ever wanted, and after failing his final time-traveling exam, Far takes a position commanding a ship with a crew of his friends as part of a black market operation to steal valuables from the past.

But during a heist on the sinking Titanic, Far meets a mysterious girl who always seems to be one step ahead of him. Armed with knowledge that will bring Far's very existence into question, she will lead Far and his team on a race through time to discover a frightening truth: History is not as steady as it seems. - from Goodreads

In the distant future, Farway McCarthy is a student hoping to become a time traveler, so he can explore history.  But after he fails his final test, he is recruited by a shady guy to locate and steal valuable items that were lost to history.  One such mission involves stealing a book from the sinking Titanic, where Far crosses paths with Eliot, a girl with many secrets.  Who is she, and what does she want?  When she finally reveals her reasons for seeking out Far, Far and his team are thrown into something that could affect all of time and space.

I love time travel (although I don't always understand it), and I especially loved the way the author approached it in Invictus.  In Far's time, time travelers are sent back to different times and places in order to record history - can you imagine being able to say you walked with dinosaurs or saw President Lincoln give his Gettysburg Address?  It sounds like the perfect job - one that Far wants desperately.  He assumes he'll get it, too - he's at the top of his class and everyone expects that he'll pass his exam with flying colors.  But he doesn't, which leads him to accept a black-market job as captain of the Invictus, with a crew comprised of his medic girlfriend Priya, historian cousin Imogen, and engineer best friend Gram.

I generally liked all the individual characters, although my one biggest problem with YA is that the teenagers always seem way too smart for their ages.  The characters are all around 18 years old, yet they're able to pilot this ship and plan and carry out missions like it's no big deal.  It's just a little weird to me.  Anyway... there was also some romance going on - I liked Priya and Far's relationship.  It felt real and deep, as opposed to the huge crush Imogen has on Gram.  Her "I like him but I can't tell him" utterings got old, real fast.  She seemed a bit immature.

When Eliot appeared on the scene, I was anxious to find out what her deal was.  I wish the author had gotten to it a bit faster; the reveal was pretty cool, but it took so long to get there and the mystery surrounding Eliot just confused me.  After her reveal, the story became tense and action-packed.  I don't want to give too much away, because it's a really fun but also unexpectedly dark and emotional ride.

I loved Graudin's writing; I've never read anything by her before, and I found her writing to be elegant in a way I don't necessarily expect from YA books.  I appreciated where she went with the story in the end; I think it was risky to have the events play out the way they did, but I was very satisfied with the choices she made.