Review: According To A Source 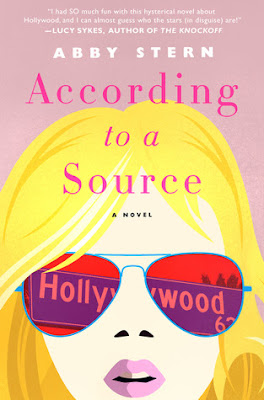 According to a Source
Abby Stern
Published May 23, 2017


We live in a society obsessed with celebrity, but have you ever wondered who is on the inside gathering the best celebrity gossip and how do they get access? According to a Source: A Novel by Abby Stern dishes on this behind the scenes world in a way that only a Hollywood insider could.

Ella Warren works for celebrity news website, The Life, as a club reporter. She’s assigned to stake out Hollywood’s hottest clubs and spy on the celebrities inside. When Ella is pressured by her Devil Wears Prada-type boss to find an exclusive story to keep her job, she has to decide if being in Hollywood’s elite inner circle is worth jeopardizing her friendship with actress Holiday Hall, her budding romance with Holiday’s agent, and her family.

A juicy, big-hearted novel about a young woman who loses herself in a fast-paced, glamorous world where finding your authentic self isn’t easy. - from Goodreads

Ella Warren is an undercover celebrity reporter, but when a new editor takes over at her magazine, she finds herself in a fight for her job, while her personal life suffers.

I love celebrity gossip, so I was really looking forward to this behind-the-scenes type novel.  It was fun to read about the different celebrities that Ella reports on, and they had more than a passing resemblance to some current celebs (although the Author's Note says they are all fictional).  The different tactics and tricks Ella's uses to get her scoops were pretty cool, too.

According to a Source was VERY reminiscent of at least one Lauren Weisberger novel, from the straightforward writing style to the plot.  Ella is a decent main character whose job ends up taking over life, to the detriment of her romantic relationship, friendships, and family relationships.  The standards she sets for herself to keep her work and private lives separate are blurred when her best friend, an actress, books a show and becomes a media target.  Should Ella betray her friend in order to save her career?  Everything that can go wrong, does, but it all seems to work out in the end.

The characters are rather one-dimensional and fit into standard stereotypes.  After getting abruptly dumped by her boyfriend of several years, Ella meets a new guy, who is smart, handsome, a snappy dresser - of course, he's perfect.  Ella also has a once-wild, now-uptight sister and a mother facing a battle with cancer.

The story was a fast, easy read: predictable but still entertaining.  It was full of fluff and cliches; if you're looking for something to read at the pool and you often find yourself checking out the latest celebrity gossip, this is your book.