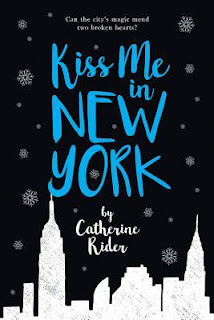 Charlotte finds herself stranded at JFK airport on Christmas Eve, where she meets Anthony, who was just spectacularly dumped by his girlfriend.  Having been recently dumped herself, Charlotte convinces Anthony that what they need to get over their exes is a night in New York City, aided by a how-to book and the magic of Christmas in New York.

This was a cute story about two strangers meeting and taking a chance, falling in love as the night goes on.  Yes, it was cliché; yes, by the end it feels like instalove; yes, I thought it was a bit weird that a 17-year-old girl would just gallivant around NYC with a stranger in the middle of the night.  But - it's Christmas, and it's New York City - and there are not many more magical times and places than that.

At less than 200 pages, the story is a really quick read and the action kept moving, although I wanted more about NYC - there are so many things they could have taken advantage of.  If you're looking for a sweet holiday love story, you'll probably enjoy this one.  3 stars 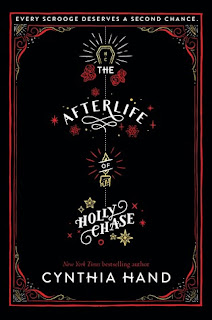 The Afterlife of Holly Chase by Cynthia Hand (2017)

An updated, modern take on the classic A Christmas Carol.  Holly is a 17-year-old girl - and not a very nice one.  This Scrooge refused to change her ways, even after being visited by the three Ghosts, so upon her death, she becomes the Ghost of Christmas Past for Project Scrooge.  Holly spends the next few years helping the organization try to reform people just like her, but this year, the Scrooge isn't the usual miserly old man - he's a hot teenage guy, and Holly finds herself attracted to him.

I like the idea of modernizing this classic story, but I did have issues with this book.  The beginning of the story happens so fast and I felt like there were either details missing or the timeline kept bouncing back and forth, so I was a bit confused right from the get-go.  The idea that Project Scrooge is an actual company that puts on a sort of "production" each year to help reform people is cool, but some of the details didn't make sense to me.  Holly is technically dead, but she can walk around and interact with living people in the real world?  What if she sees someone she knows?

Holly was not the nicest main character.  Before she dies, she is spoiled and selfish, purposely doing things to hurt people.  Even after working at Project Scrooge for 5 years, she doesn't seem to have changed at all.  For most of the book, she is cold to most people and still acts very selfishly, putting the entire Project Scrooge at risk just to spend some time with a cute boy.  Yet, I somehow still found myself rooting for Holly, hoping that she would have some sort of ephiphany.  3 stars
Posted by Angela at 5:00 AM