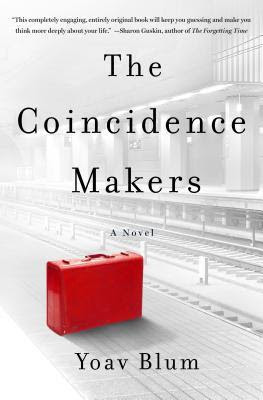 
The Coincidence Makers tells the story of Guy, Emily & Eric, whose job is creating coincidences and initiating various events in other people's lives.
The three graduated from a “coincidence creation course” that took place 2 years prior to the events in the book, in which they learned techniques for creating what look like random events which will cause people to change their own lives. Fate is nothing more than a well-executed mission.
Coincidence Makers are not regular people. They are responsible for organizing random encounters between lovers-to-be, creating moments of inspiration that help people make life changing decisions or “building” coincidences that cause important scientific discoveries.
But when Guy gets a new special mission, that mission, along with a mysterious killer who appears in town and other hidden forces that he is not aware of, are going to change everything for the three coincidence makers and teach them about fate, free will & the true nature of love. -  from Goodreads

This book was originally published in 2011, but it's now being translated into English and being released in 2018.  The idea of fate really intrigues me, and the way it's played with in this book sounds so interesting!
Posted by Angela at 5:00 AM