Review: The Confusion of Languages 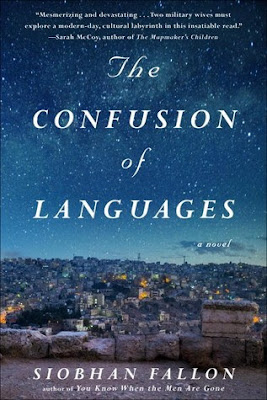 
A searing debut novel from the award-winning author of You Know When the Men are Gone, about jealousy, the unpredictable path of friendship, and the secrets kept in marriage, all set within the U.S. expat community of the Middle East during the rise of the Arab Spring.

Both Cassie Hugo and Margaret Brickshaw dutifully followed their soldier husbands to the U.S. embassy in Jordan, but that's about all the women have in common. After two years, Cassie's become an expert on the rules, but newly arrived Margaret sees only her chance to explore. So when a fender-bender sends Margaret to the local police station, Cassie reluctantly agrees to watch Margaret's toddler son. But as the hours pass, Cassie's boredom and frustration turn to fear: Why isn't Margaret answering her phone, and why is it taking so long to sort out a routine accident? Snooping around Margaret's apartment, Cassie begins to question not only her friend's whereabouts but also her own role in Margaret's disappearance.- from Goodreads

Cassie and Margaret are military wives living in Jordan in 2011.  After getting into a minor car accident, Margaret goes to the police station, leaving her son Mather with Cassie.  After several hours, she still hasn't returned, leaving Cassie to wonder where she is and what has happened to her.  When Cassie finds Margaret's diary, she realizes Margaret has been keeping many secrets from her.

Most of the story takes place over the course of one night, after Margaret has gone to the police station.  Excerpts from Margaret's diary fill in many blanks for both the reader and Cassie, as we learn more about Margaret's short time in Jordan and Cassie finds out what Margaret really thinks of her.

The friendship between Margaret and Cassie is at the center of the story.  While the two women have some things in common (both are having issues in their marriages), they are very different from one another.  Cassie, having lived in Jordan for two years, feels she knows the area and culture well; she is very much a rule follower and takes seriously the parameters set up by the embassy.  At times, though, she seems overly suspicious of people around her.  She is controlling and prickly and comes across as almost desperate for a friendship with Margaret, or anyone really.

Margaret, however, is more of a free spirit.  She is very open with new people and wants to fully experience life in Jordan.  At times I couldn't tell if she was willfully ignorant or just naïve - no matter how times Cassie warned her about her behavior or clothing choices, especially around men, Margaret didn't seem to get it.  She didn't seem to understand the ramifications her actions could have, or maybe she didn't really believe anything bad would happen, that Cassie was just being overly cautious.  I wasn't necessarily surprised by what happens to Margaret at the end of the book, but the route it took to get there and what was revealed did surprise me.

The setting of Jordan was a unique one for me; I don't read too many stories set in the Middle East.  Fallon did a great job in educating the reader on the nuances of the culture and people of Jordan, most likely inspired by her own experience living there as a military wife.