Review: The One That Got Away 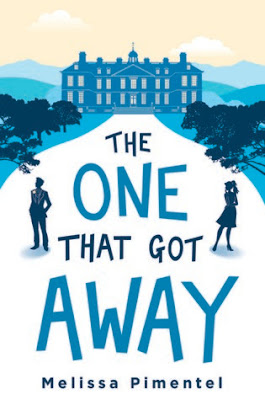 The One That Got Away
Melissa Pimentel
Published August 22, 2017


A smart, funny, and modern retelling of Jane Austen's Persuasion, where a young woman comes face-to-face with a lost love, proving that the one that got away is sometimes the one you get back.

Ruby and Ethan were perfect for each other. Until the day they suddenly weren't.

Ten years later, Ruby's single, having spent the last decade focusing on her demanding career and hectic life in Manhattan. There's barely time for a trip to England for her little sister's wedding. And there's certainly not time to think about seeing Ethan there for the first time in years.

But as the family frantically prepare for the big day, Ruby can't help but wonder if she made the right choice all those years ago? Because there's nothing like a wedding for stirring up the past . . . - from Goodreads

So, I'll be honest - I've never read Jane Austen's Persuasion, so I can't comment on if this is a good retelling or not.  And, I'm wary of second-chance love stories, so I went into this with a bit of hesitation.  But - I couldn't resist that adorable cover!

Ruby is a 32-year-old career woman living in New York City.  When her sister plans a fairy-tale wedding in an English castle, Ruby finds herself face-to-face with Ethan, the boyfriend she broke up with 10 years ago and the best man in the wedding.  She thinks she could possibly still be in love with him, but does he feel the same way?  She knows she ended their relationship badly and has been hiding the true reason she broke up with him.

The story went back and forth between the days leading up to Ruby's sister's wedding and flashbacks to Ruby and Ethan's short-lived romance.  I liked the approach, but I just wanted to know what Ruby did that she felt was so bad that she couldn't tell Ethan.  And when I found out, I was a bit disappointed by the cliché reason.

The main issue I had with the story was that Ruby and Ethan haven't spoken in 10 years, yet Ruby has hinged her whole life on this relationship.  She threw herself into her career and never really opened herself back up to love, and when she sees Ethan, she is convinced she is still in love with him.  It's been a decade, and they are vastly different people at this point in their lives.  It's just a little weird that neither of them have moved on, considering their actual relationship was relatively short.  When Ruby finally admits her feelings for Ethan and the true reason she broke up with him, it's like what she did didn't even matter.  The whole thing is glossed over in literally the last 10 pages or so.  The story ended way too abruptly and neatly.

But, there were high points to this book.  I loved the secondary characters - Ruby's dad is boisterous and I like the relationship Ruby has with her stepmom.  Ruby's sister is the perfect example of a bridezilla.  The writing was very readable and quick-moving - I finished this book in just a day.  The pop culture references and snarky one-liners helped keep the story light and modern.  If you're looking for a quick, easy read, you may enjoy this one.