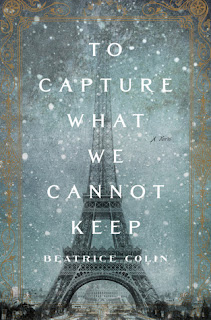 To Capture What We Cannot Keep by Beatrice Colin (2016)

Caitriona Wallace, a widow charged with chaperoning two siblings during their European Tour, meets engineer Émile Nouguier during a hot air balloon ride over Paris.  Caitriona and Emile are drawn to each other, even though everyone around them tells them they can't be together.  Emile needs a young, rich wife, like Cait's charge Alice, who can give him heirs and help prop up his family's company.  Cait's options are much more limited.

Although this book was a romance, I didn't really care for the relationship between Cait and Emile.  Emile courts Alice as an excuse to see Cait, and I couldn't really pin down Cait as a character; her personality and actions seemed to change by the chapter.

Much more interesting to me in this book were the descriptions of late 19th century Paris and the construction of the Eiffel Tower, of which Emile is a lead engineer.  It was funny to hear the characters of the period refer to the Tower as a temporary structure for the upcoming World's Fair, knowing today that the Eiffel Tower is such an iconic symbol of Paris. 3 stars 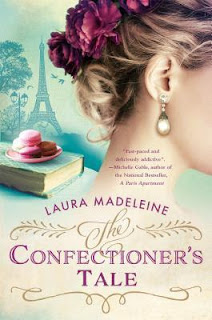 The Confectioner's Tale by Laura Madeleine (2015)

A dual timeline and a Paris setting?  There was little chance I wasn't going to read this book!

Back in 1910, a love affair begins between a high society lady and a man working in her father's patisserie.  In 1988, a student finds out her grandfather had some connection to the couple and wants to find out what happened almost 80 years before, before a potential scandal erupts.

I love a good dual timeline - although sometimes one of the stories suffers a bit, here they both worked.  The older story had a bit more of a poetic, romantic feel, while the "present-day" story was more analytical and even a bit frenzied.  The way the two stories came together was a bit surprising; I was glad the author didn't take the typical route, especially since the love story wasn't breaking any new ground.

Oh, and don't read this story on an empty stomach - the descriptions of the pastries, sugar, and chocolate are mouth-watering!  4 stars
Posted by Angela at 5:00 AM