Review: When The English Fall 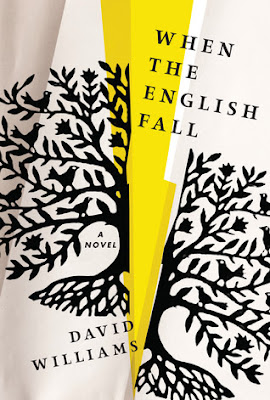 
When a catastrophic solar storm brings about the collapse of modern civilization, an Amish community in Pennsylvania is caught up in the devastating aftermath. Once-bright skies are now dark. Planes have plummeted to the ground. The systems of modern life have crumbled. With their stocked larders and stores of supplies, the Amish are unaffected at first. But as the English (the Amish name for all non-Amish people) become more and more desperate, they begin to invade Amish farms, taking whatever they want and unleashing unthinkable violence on the peaceable community.

Seen through the diary of an Amish farmer named Jacob as he tries to protect his family and his way of life, When the English Fall examines the idea of peace in the face of deadly chaos: Should members of a nonviolent society defy their beliefs and take up arms to defend themselves? And if they don’t, can they survive? - from Goodreads

When the English Fall is not your typical disaster story.  Told from the point of view of an Amish farmer, this short, quiet story really took me by surprise.

Jacob and his family are part of an Amish community in Pennsylvania.  Jacob is a farmer, but he also makes custom wood furniture, so he occasionally has contact with English (non-Amish) people.  When a solar flare knocks out all electronics, the Amish community is threatened by outsiders.

The point of view of this story is so unique - normally when I read disaster stories, they are about regular people like me trying to come to grips with a "new normal."  But other than a community refrigerator and a washing machine, the Amish in this story rely very little on electronic devices and are a self-sufficient, somewhat isolated community.  The loss of power and dwindling food supplies outside their borders initially have little effect on them.

Instead of getting a first-hand account of how the aftermath of the solar flare is affecting the population, we get rumors and sparse information as Jacob does, from an Amish community member who traverses the area on horseback.  As the book goes on, the stories get more desperate and even dangerous.  The Amish are approached by the military to donate food, but as society breaks down, the community is attacked by outsiders.

The faith-based POV was another intriguing aspect to the story.  The Amish community wonders how much they should be helping the English, if they have a duty to help society as a whole or even those individuals who come to them seeking help.  There's also the issue of defending themselves when they are normally opposed to violence.  It must have been a struggle for Jacob and the others to hear the sounds of gunfire near their farms but not want to pick up their own guns.

The story is in diary form and has a very simple writing style, which at times made the story all the more powerful.  For example, Jacob describes watching the beauty of the solar flare across the sky, but then he sees planes falling out of the air - it gave me chills. Told over the course of just a couple months, the story had an open ending that made me think about the fates of Jacob and his family long after I finished reading.

The only quibbles I had with the book were that, at fewer than 250 pages, it was quite short and could have been expanded upon in certain areas, and there was a bit of a sci-fi feeling with premonitions coming from Jacob's daughter, Sadie.  For me, they just didn't really fit with the rest of the story.