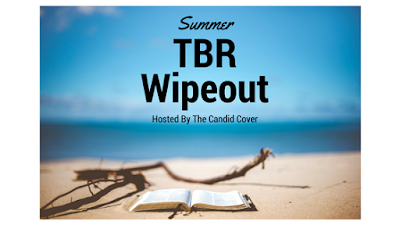 Hey, all!  Hope you're enjoying your summers and getting some good reading in!  Two weeks ago I started the Summer TBR Wipeout 2017 hosted by The Candid Cover, so it's time to update my progress!

I started with Caraval by Stephanie Garber, which I've had on my TBR since last year.  I'd seen some mixed reviews on this one, but the magic and fantasy aspects drew me in (for some reason, this summer I've really been wanting to read a lot of fantasy stories!).  I loved the magical parts of this book - the idea of this fantastical game, the crazy buildings, the clothes that change according to your mood, the idea that NO ONE is who they say they are.  But, the writing was overly flowery with some strange descriptions (how can something smell like the moon or laughter?) and the main character Scarlett was kind of infuriating at times.  However, the epilogue did get me a bit excited, because it seems like the next story will be from sister Tella's POV, and she's definitely the more interesting of the two sisters!

Next, I moved onto Driving Lessons by Zoe Fishman, a book I bought at B&N on a whim.  This story is about a woman and her husband who move to Virginia from NYC for a slower pace of life, but when her best friend is diagnosed with cancer, she goes back to NYC to help her out.  Unfortunately, I didn't enjoy this one that much.  The story felt very disjointed - I would have preferred more of a "fish out of water" story set solely in Virginia.  The main character is obnoxious and grumpy, and the story is too heavy-handed with the topics of babies and pregnancy.

Then, I moved onto Last Summer by Holly Chamberlin, a story about two women, their daughters, bullying, and a ruined friendship.  I couldn't get into the stuffy writing of this book, so I DNFed at page 25.

Based on a great review from The Bookish Libra, I wanted to make sure I read The Twelve Lives of Samuel Hawley by Hannah Tinti sooner rather than later.  I was impressed by this story about a father-daughter relationship.  Not only is it a great coming-of-age story for daughter, Loo, but it's also kind of a coming-of-age story for father, Hawley, too.  Flashbacks show Hawley's violent past but also how he has now evolved into a very protective and loving father.  And it was interesting to see how growing up with a father like Hawley has affected Loo (she's definitely not a meek character!).