For this installment, I've chosen science fiction.  Dark Matter by Blake Crouch (2016) has been on my radar for a few months now, but I was hesitant to read it because it's labeled as science fiction.  I'm not a big science/math person, so I often just feel confused/frustrated/annoyed with books that have too much focus on those topics.  But, this book was also described as being a thriller and a love story, so I wanted to try it out. 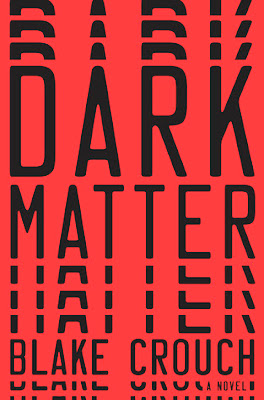 “Are you happy with your life?”

Those are the last words Jason Dessen hears before the masked abductor knocks him unconscious.  Before he awakens to find himself strapped to a gurney, surrounded by strangers in hazmat suits. Before a man Jason’s never met smiles down at him and says, “Welcome back, my friend.”

In this world he’s woken up to, Jason’s life is not the one he knows. His wife is not his wife. His son was never born. And Jason is not an ordinary college physics professor, but a celebrated genius who has achieved something remarkable. Something impossible.

Is it this world or the other that’s the dream? And even if the home he remembers is real, how can Jason possibly make it back to the family he loves? The answers lie in a journey more wondrous and horrifying than anything he could’ve imagined—one that will force him to confront the darkest parts of himself even as he battles a terrifying, seemingly unbeatable foe. - from Goodreads


Guys, this was just... wow.  Even if you don't think you're a science fiction fan, I think you need to read this book.  Jason Dessen is a physics professor with a beloved wife and son.  After being abducted, he wakes up in a strange place surrounded by people who claim to know him - but he's never met them before.  He escapes to find that his home looks completely different, he isn't married to his wife, and his son doesn't exist.  Is he dreaming?  Does he have a brain tumor that has altered his perception of reality?  Is someone playing an elaborate hoax on him?

I don't want to talk too much more about the plot and spoil it, because finding out what truly is going on is really the essence of the book and just the most fantastic twist.  It does get a bit science-y, but even I could understand what the characters were talking about, and I loved it.  Every few chapters I would say to my husband, "Guess what's happening NOW?"  This book would be totally up his alley.

As I said before, this book is more than just science fiction - it's also a thriller that I could not stop reading.  I literally read this book in a few hours.  The short, staccato sentences kept the story moving, and I had to know what would happen next.  I loved Jason as a character - I felt invested in his journey, and I was rooting for him.  I was really impressed by his ability to remain mostly calm and really think through his situation and the next steps to take.

And then there's the love story - Jason and his wife have been married for years, and they have such a great relationship.  They really do seem to love each other more now than they did when they first met.  Finding his wife and son is Jason's top priority, and I just loved his focus.  Even when things seemed dire, his only thoughts are of them and how to get back to them.
Posted by Angela at 7:00 AM

Email ThisBlogThis!Share to TwitterShare to FacebookShare to Pinterest
Labels: science fiction, Try it