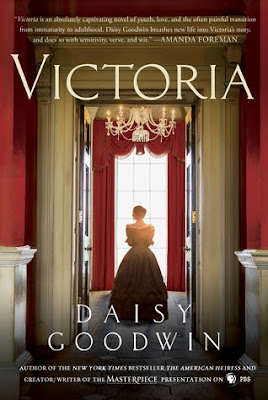 
In 1837, less than a month after her eighteenth birthday, Alexandrina Victoria – sheltered, small in stature, and female – became Queen of Great Britain and Ireland. Many thought it was preposterous: Alexandrina — Drina to her family — had always been tightly controlled by her mother and her household, and was surely too unprepossessing to hold the throne. Yet from the moment William IV died, the young Queen startled everyone: abandoning her hated first name in favor of Victoria; insisting, for the first time in her life, on sleeping in a room apart from her mother; resolute about meeting with her ministers alone.

One of those ministers, Lord Melbourne, became Victoria’s private secretary. Perhaps he might have become more than that, except everyone argued she was destined to marry her cousin, Prince Albert of Saxe-Coburg and Gotha. But Victoria had met Albert as a child and found him stiff and critical: surely the last man she would want for a husband…. - from Goodreads

I want to love Daisy Goodwin.  Her books always have premises/characters/settings I should love, but I never seem to.  Victoria is, unfortunately, no exception.

Goodwin's book focuses on a short period of time in Victoria's life, immediately after she becomes queen.  This was an extremely trying time in her life, as she was only 18 years old but gaining an enormous amount of responsibility.  Victoria had a lot to prove when she gained the throne; her youth and her gender were major points against her.  If she even became upset about something like seeing a rat, there were conversations about her being unfit to rule!  It was so disheartening; I can't even imagine what she really went through.  Unfortunately, in her desire to prove herself to her mother and others, Victoria often came across as immature and careless.

The bulk of the book focuses on the personal and professional relationship between Victoria and her Prime Minister, Lord Melbourne.  It became annoying that Victoria couldn't even seem to function in the novel without the guidance or presence of her "Lord M."  I think Goodwin took a lot of liberties with the character of Lord Melbourne.  She insinuates quite strongly in the book that there was attraction and nearly a relationship between Victoria and Melbourne, which I don't think was really the case.  Particularly since Goodwin was able to read Victoria's diaries, I expected more historical accuracy, but perhaps she felt the lover angle would be more intriguing than having Melbourne act as a father figure for the Queen.

The ending of the story was a bit strange for me.  I think many people know of the longevity of Victoria's reign and her romance with husband Albert.  Goodwin barely acknowledges this in the story.  Albert finally arrives as a character in the last 100 pages or so, and the two are so awkward around each other.  He doesn't seem to like her very much, questioning how a marriage between the two of them would work.  Victoria's decision to propose to Albert seemed hasty, and his acceptance seemed contrary to what he had been thinking only pages before.  I don't know how reflective of real life this part of the book actually was, but it didn't work for me here.

The writing is about average, and even though the book is 400 pages, nothing of consequence really seems to happen.  The story just kind of plods along and ends rather abruptly.  Ugh, I was so looking forward to this book, too!