Review: The Royal We 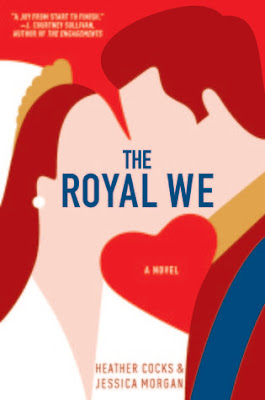 
"I might be Cinderella today, but I dread who they'll think I am tomorrow. I guess it depends on what I do next."

American Rebecca Porter was never one for fairy tales. Her twin sister, Lacey, has always been the romantic who fantasized about glamour and royalty, fame and fortune. Yet it's Bex who seeks adventure at Oxford and finds herself living down the hall from Prince Nicholas, Great Britain's future king. And when Bex can't resist falling for Nick, the person behind the prince, it propels her into a world she did not expect to inhabit, under a spotlight she is not prepared to face.

Dating Nick immerses Bex in ritzy society, dazzling ski trips, and dinners at Kensington Palace with him and his charming, troublesome brother, Freddie. But the relationship also comes with unimaginable baggage: hysterical tabloids, Nick's sparkling and far more suitable ex-girlfriends, and a royal family whose private life is much thornier and more tragic than anyone on the outside knows. The pressures are almost too much to bear, as Bex struggles to reconcile the man she loves with the monarch he's fated to become.

Which is how she gets into trouble.

Now, on the eve of the wedding of the century, Bex is faced with whether everything she's sacrificed for love-her career, her home, her family, maybe even herself-will have been for nothing. - from Goodreads

As someone who loves all things royal, I just had to read this book.  Kate Middleton/Prince William fan fiction?  Yes, please!  And this book (mostly) delivered - it was fun, funny, full of insider details, and surprisingly deeper than I expected.

The Royal We is told from the viewpoint of Bex, an American student who decides to do a year abroad at Oxford, where she meets Prince Nicholas.  We see them become close friends; start a relationship; break up for a time; and eventually get back together and engaged, over the course of 8 years.  It's sweet to see Bex and Nick fall in love at school, away from his royal obligations, but there are so many obstacles to their relationship as the years go on.

I appreciated that their story wasn't a perfect fairy-tale romance, but I kind of wish we had gotten to see more of the better times.  The chapters often skip ahead months or even years; we actually don't even get to experience the first couple years of their relationship, including a long-distance time when Bex is back in America, which I think would have been fun to read about.

It was hard to see Bex struggle with maintaining a relationship with a future King of England.  It's obvious that she loves Nick for himself and not his title, but there are so many strings attached.  It's difficult to decide if it was harder for their relationship to be a secret (when Nick couldn't even acknowledge Bex at his own birthday party) or to go public (when Bex began to face more serious scrutiny in the press and started to undergo her royal training).  Sometimes it seemed like everyone around them was against them, and Bex too often felt like she had to give up parts of herself to be with Nick.  At times I wondered if Nick was even worth the pain she had to go through.

There were a lot of things I loved about this book.  The writing is sharp and funny, and the story moves along quickly.  Many of the supporting characters are fantastic additions.  There were fun tidbits thrown in about the royal palaces and life as a royal.  I really feel like I got an insider look at a life most people wouldn't even dream about.

4 stars - For anyone who got up at the crack of dawn to watch the royal wedding!
Posted by Angela at 8:00 AM