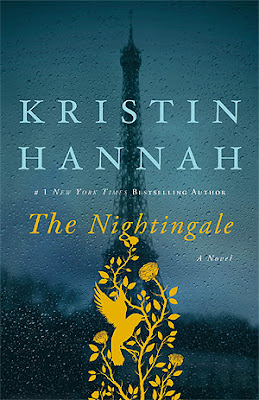 In the quiet village of Carriveau, Vianne Mauriac says goodbye to her husband, Antoine, as he heads for the Front. She doesn’t believe that the Nazis will invade France...but invade they do, in droves of marching soldiers, in caravans of trucks and tanks, in planes that fill the skies and drop bombs upon the innocent. When France is overrun, Vianne is forced to take an enemy into her house, and suddenly her every move is watched; her life and her child’s life is at constant risk. Without food or money or hope, as danger escalates around her, she must make one terrible choice after another.

Vianne’s sister, Isabelle, is a rebellious eighteen-year-old girl, searching for purpose with all the reckless passion of youth. While thousands of Parisians march into the unknown terrors of war, she meets the compelling and mysterious Gäetan, a partisan who believes the French can fight the Nazis from within France, and she falls in love as only the young can...completely. When he betrays her, Isabelle races headlong into danger and joins the Resistance, never looking back or giving a thought to the real--and deadly--consequences. - from Goodreads

I've read several books by Kristin Hannah, and this one is probably my favorite yet.  It has a different feel from her other novels, although it contains some of her common themes of family relationships and love.

The Nightingale tells the stories of Vianne and Isabelle, two sisters living in France during World War II.  There is a fairly large age gap between the sisters and some tension as well, as Isabelle still harbors some resentment about the way Vianne treated her after their mother passed away.  Vianne is now married with a daughter, living in a small town and working as a teacher.  Isabelle is 18 years old and getting kicked out of one boarding school after another.

Isabelle goes to her sister's home during the war, but is disgusted at the way Vianne seems to accept the Nazi control and the German officer billeted at her home.  Vianne is frustrated that Isabelle can't see that she must protect her daughter.  Isabelle eventually joins the Resistance, seeing it as her way to help the French cause.  She takes many risks, both with her life and others.

The sisters love each other but don't seem to understand each other.  Vianne is older, more settled; Isabelle is impulsive and rebellious.  However, as the story goes on, we see that they are more alike than they think.  While not actively working for the Resistance, Vianne can't help standing up to the Nazis at times, particularly when children are involved, and she eventually works to save many Jewish children.  Both Vianne and Isabelle show bravery and strength beyond measure.

The book also describes the conditions of the French people living under Nazi rule.  They endured years of hardships, with little food or heat for their homes during the winter.  It was heartbreaking to read how women and children suffered and how they lived in constant fear.

4 stars - A beautiful, moving and in-depth look at a French Resistance fighter and a woman trying to survive at the home front.  A must read for fans of historical fiction, particularly the World War II era.
Posted by Angela at 8:00 AM