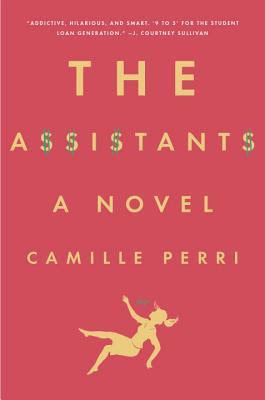 Tina Fontana is the hapless but brazen thirty-year-old executive assistant to Robert Barlow, the all-powerful and commanding CEO of Titan Corp., a multinational media conglomerate. She’s excellent at her job and beloved by her famous boss—but after six years of making his reservations for restaurants she’d never get into on her own and pouring his drinks from bottles that cost more than her rent, she’s bored, broke, and just a bit over it all.

When a technical error with Robert’s travel-and-expenses report presents Tina with the opportunity to pay off the entire balance of her student loan debt with what would essentially be pocket change for her boss, she struggles with the decision: She’s always played by the rules. But it’s such a relatively small amount of money for the Titan Corporation—and for her it would be a life-changer . . .

The Assistants speaks directly to a new generation of women who feel stuck and unable to get ahead playing by the rules. It will appeal to all of those who have ever asked themselves, “How is it that after all these years, we are still assistants?” - from Goodreads

What a fun summer book!  In The Assistants, executive assistant Tina Fontana mistakenly ends up with a $20,000 expense check reimbursing her for plane tickets for her boss that were later comped by the airline.  She knows she should return or destroy the check, but she also knows it could pay off her entire student loan debt.  It's not a spoiler to say that she cashes the check and pays off her debt; this happens in the first chapter.  But what happens when she is caught by an assistant in the accounting department is where the story takes a whole new direction.

Tina is a great character.  She's smart, funny, and so relatable - she's like so many millennials out there, trying to pay off a mountain of student loan debt while working at a good-but-not-great job.  The writing is fresh and the subject matter is so timely.  There are a lot of recent college graduates out there with student loan debt that don't have great job prospects due to the current market.  This book takes a look at a subset of those graduates, women who have found jobs as assistants but don't necessarily have many opportunities to advance.  It was great to see these women bond and also find a way to help others like them, even if it wasn't their original plan.

I think my only minor complaint is that this book is quite short.  The plot moves along very quickly, which is good, but some events could have been fleshed out a bit more.  The ending also ties things up just a little too neatly.

4.5 stars - Perfect beach read that also gives a wry commentary on current events.  Definitely recommended for anyone paying off student loans who needs a laugh!
Posted by Angela at 8:00 AM