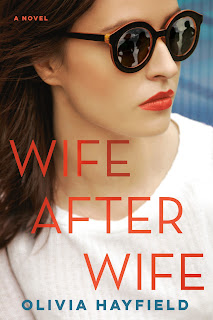 Wife After Wife by Olivia Hayfield (2020)

I am kind of obsessed with England's Tudor dynasty, so when I heard about this modern retelling of Henry VIII and his six wives, I knew I had to read it!  This book starts in 1985, when Harry Rose (Henry VIII) is married to Katie (Catherine of Aragon), and continues all the way to 2018, encompassing all the major events of the historical figure's life, but with a twist.

Instead of being the King of England, Harry Rose is a media mogul always at the cutting edge.  I thought it would be really difficult for Hayfield to create justifications for six marriages in this day and age, but she managed it in some clever and unexpected ways.  Likewise, he obviously couldn't actually behead his wives, yet Hayfield was still able to include some untimely deaths.  A huge portion of the book is spent on the first two wives, which basically fits with the original timeline, but it also then felt like the last four marriages were rushed a bit.  The writing was a bit stiff and stilted at times, and there were some cheesy scenarios, but the story was generally a soapy, gossipy, drama-filled delight that I couldn't stop reading.  Hayfield also included a lot of pop culture references, which helped ground the story in the time period and setting.  4 stars 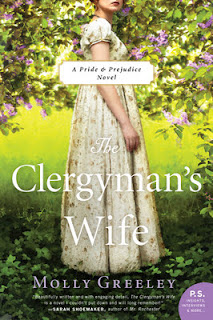 The Clergyman's Wife by Molly Greeley (2019)

In The Clergyman's Wife, Molly Greeley explores a side character from Pride & Prejudice and what her life might have been like after that story ended. Charlotte Lucas is known for being Elizabeth Bennet's best friend and the woman who married Mr. Collins after Elizabeth rejected him.  It seemed like an abrupt decision, and in this book, we go inside Charlotte's head and get to know her much better.

This book is a short, quiet, and thoughtful read.  Greeley explores the marriage between Charlotte and Mr. Collins; as the years have passed, Charlotte begins to wonder if she made the right decision in marrying him.  She saw it as an opportunity for security and comfort but never as a love connection.  When she meets farmer Mr. Travis, she feels things she has never felt for her husband.

I enjoyed this new look at the Pride & Prejudice world.  It was nice to revisit the characters.  Mr. Collins is still an awkward man who is constantly looking for praise from others.  Elizabeth and Darcy make an appearance, as well.  But Charlotte is undoubtedly the star, and we get to see her in a whole new light.  4 stars
Posted by Angela at 3:00 AM