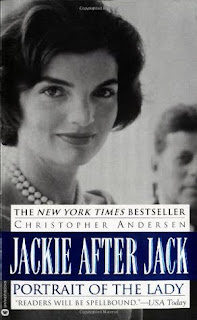 Jackie After Jack: Portrait of the Lady by Christopher Andersen (1988)

Thank you to Amy at A Magical World of Words for the recommendation!

In Jackie After Jack, author Christopher Andersen has put together a fairly comprehensive look at Jackie Kennedy Onassis' life after the death of John F. Kennedy, despite the fact that she was one of the most private people in the world.  I find the Kennedy family fascinating, yet there was still so much I didn't know about Jackie.  This book was well-written, gossipy, and surprising at many turns.  I almost feel like if you are a Jackie fan, you might not want to read this book, because it doesn't always present her in the most flattering way.  She comes across as strong at times, set in her ways, very protective of her children - but also a compulsive spender, potentially addicted to drugs, and having affair after affair.  Honestly, I couldn't believe some of the "previously unreported" stories - including a brief romance that both she and the alleged man kept completely secret.  I wanted more of how Jackie cultivated the Camelot myth, which I didn't realize wasn't promulgated until after JFK's death.  I did enjoy the parts about Jackie's foray into the publishing world - she seemed to be an exceptional editor and really came into her own in a job she didn't even need.  For me, Jackie is always associated with JFK, but she also lived a complete life after him, and this book is a look inside that extraordinary life.  3.5 stars 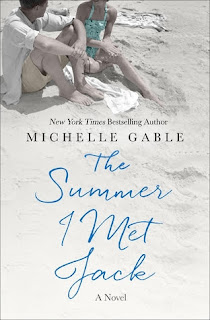 In this historical fiction novel, Michelle Gable crafts a story around the real life woman, Alicia Corning Clark, and her alleged affair with John F. Kennedy.

In 1950, Polish refugee Alicia Darr finds herself in Hyannisport, where she meets JFK while working for his family as a maid.  Their relationship is quite hot and cold - although at one point they are engaged and just days away from marriage, they also spend a lot of time apart as JFK fulfills his duties in Washington.  Eventually, Alicia moves to Hollywood and even Rome, in an attempt to create a new life for herself, but JFK seems to pop up everywhere, never letting her forget their affair.

Alicia is not the most likable character - to me, she seemed very haughty and forward, and besides her high-profile relationships, I'm not quite sure what else she did with her time.  Her attempts at being an actor and artist were not successful.   The Kennedy family, likewise, is not portrayed very well here, either.  Gable notes that she read extensively on the Kennedy family before starting this book, so maybe they really weren't the nicest people?  It's also interesting to note that although Alicia Darr/Alicia Corning Clark was a real person who might have had a relationship and even a child with JFK, this story is almost completely from the imagination of the author.  3 stars
Posted by Angela at 3:00 AM