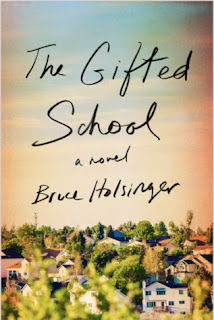 The Gifted School by Bruce Holsinger (2019)

When a community announces that a school for gifted students will be opening soon, four families become caught up in the storm of trying to get their children a place in it.

There were so many things to love about this book!  I enjoyed the realistic feel of it - these wealthy families who all believe their child is intelligent and special enough to deserve a place in the gifted school, doing some questionable things to get them there, and how the community as a whole responded to the new school.  There were a lot of relationships at play, and a lot of pressure put on them (spouses, friends, parents and children).  I thought the narrator did a great job distinguishing between the many characters, as the various chapters flitted between women, men, teenagers, and even children.  Although I'm not usually a fan of child POVs, it worked here because we get to see the story from all angles.  I wasn't super-crazy about the twist/reveal near the end of the book; the story needed something but I'm not sure that was it.  But, if you're a fan of stories about friendships, competition, and secrets, I'd highly recommend this one!  4 stars 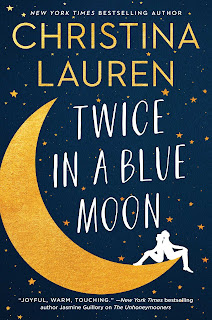 Twice in a Blue Moon by Christina Lauren (2019)

I am fairly new to the writing duo of Christina Lauren and I've loved pretty much all the books I've read by them, but this one wasn't my favorite.

Tate meets Sam in London, and because they share such an instant connection, she feels comfortable telling him her biggest secret - that her dad is one of the most famous actors in the world and she and her mom have been hiding their identities for years.  Sam ends up leaking the secret to the press, and the two don't see each other for 14 years, ending up together on the same movie set.  Can Tate forgive Sam?

One thing that bothered me a little about the story is that I felt there were holes in Tate's background that were never really explained.  Did her dad ever try to get in touch over the last 10 years?  Why the need to stay completely hidden and change their names?   And Sam's betrayal seemed to work out pretty well for her - I understand she was hurt, but it catapulted her into an acting career, and the issues she seems to have with her fame felt like things that are common to lots of celebrities and not unique to her.   I had some issues with the audiobook narrator - it's not easy for a woman to mimic a man's voice, but all the male characters sounded the same and kind of smarmy.  However, I liked the movie set setting and all the behind-the-scenes industry stuff, and I appreciated that Tate was still close with her childhood best friend. 3.5 stars
Posted by Angela at 3:00 AM