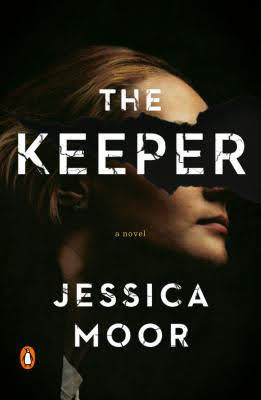 When Katie Straw's body is pulled from the waters of the local suicide spot, the police are ready to write it off as a standard-issue female suicide. But the residents of the domestic violence shelter where Katie worked disagree. These women have spent weeks or even years waiting for the men they're running from to catch up with them. They know immediately: This was murder.

Still, Detective Dan Whitworth and his team expect an open-and-shut case--until they discover evidence that suggests Katie wasn't who she appeared. Weaving together the investigation with Katie's final months as it barrels toward the truth, The Keeper is a riveting mystery and a searing examination of violence against women and the structures that allow it to continue, marking the debut of an incredible new voice in crime fiction. - from Goodreads

Told in alternating "then" and "now" chapters, The Keeper tells the story of Katie Straw, a woman found drowned in a river, as the police try to determine if she committed suicide or was murdered.  I wouldn't characterize this one as a thriller; there's definitely not a lot of action, especially in the "now" chapters.  The police kind of go back and forth on their theories, but there doesn't seem to be any real urgency.  The "then" chapters captured my interest more, as we follow Katie through the last months of her life.  As a warning, this book heavily features domestic violence and abuse.  It's not terribly graphic, but it's definitely there.  Moor did a great job detailing the many types of abuse - physical, mental, emotional.  In addition to Katie's story, we are also introduced to several women at the domestic violence shelter where she worked.  I did think many of the characters were not well-drawn.  They often felt one-dimensional with harsh edges, and then there's Detective Whitworth, who was so obtuse and clueless.  He was constantly saying the wrong thing, especially to women.  The writing was good and kept me interested, although there were a couple areas where the author incorporated a different writing style that I felt didn't work with the story and just left me confused.  A big twist near the end helped save the book for me a little and was definitely something I never saw coming.