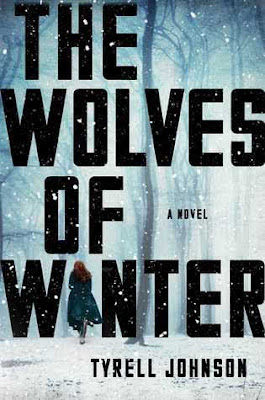 Lynn McBride has learned much since society collapsed in the face of nuclear war and the relentless spread of disease. As memories of her old life haunt her, she has been forced to forge ahead in the snow-covered Canadian Yukon, learning how to hunt and trap to survive.

But her fragile existence is about to be shattered. Shadows of the world before have found her tiny community—most prominently in the enigmatic figure of Jax, who sets in motion a chain of events that will force Lynn to fulfill a destiny she never imagined. - from Goodreads

The Wolves of Winter is a post-apocalyptic thriller that takes place in the snowy Yukon.  Here are five reasons why you might enjoy this book as much as I did:

1.  Lynn.  Lynn is the main character.  She's 23 years old and has been surviving with her family in the Canadian wilderness for 7 years since the collapse of life as she knew it.  What I liked most about Lynn is that even though she's adapted to this new life (she's an ace with a bow and arrow), she's feeling restless and wants to know more about what's going on in the world.  It felt very relatable.

2.  The plausibility of the backstory.  When the characters were explaining how the world got to this point, it honestly didn't sound far-fetched to me, and that was kind of scary.  In a post-9/11 world, people were used to sometimes random attacks, until one was just the last straw.  The United States retaliated with nuclear weapons against several countries, while we too were also attacked.  After that, a virulent strain of the flu began to wipe out large portions of the population.

3.  The action.  Although the book started off a bit slow, once Jax shows up at Lynn's family's homestead, the action takes off and never stops.  Jax is not who he appears to be at first, and Lynn and her family are pulled into the types of dangerous situations they hoped to avoid by building a life so far from civilization.

4.  The twists and turns.  The revelation of Jax's true nature was quite surprising, and as we are also introduced to a group of people who are trying to stop the spread of the flu virus and rebuild society, it was hard to know who to trust.  I kind of had an idea about Lynn's father and the secrets he kept through her flashbacks, but most of the time it was very unclear how the story would end for Lynn and her family.

5. The ending.  I actually kind of like when a story has a bit of an open ending - I can imagine all the different things that might happen to the characters after the last page.  Here, Lynn has hope, yet at the same time, the world is a difficult place and it's unclear whether she can actually help.