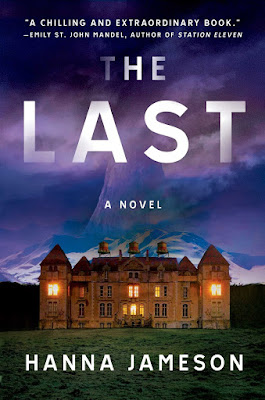 Thanks to Jennifer - Tar Heel Reader for the recommendation!

For fans of high-concept thrillers such as Annihilation and The Girl with All the Gifts, this breathtaking dystopian psychological thriller follows an American academic stranded at a Swiss hotel as the world descends into nuclear war—along with twenty other survivors—who becomes obsessed with identifying a murderer in their midst after the body of a young girl is discovered in one of the hotel’s water tanks.

Jon thought he had all the time in the world to respond to his wife’s text message: I miss you so much. I feel bad about how we left it. Love you. But as he’s waiting in the lobby of the L’Hotel Sixieme in Switzerland after an academic conference, still mulling over how to respond to his wife, he receives a string of horrifying push notifications. Washington, DC has been hit with a nuclear bomb, then New York, then London, and finally Berlin. That’s all he knows before news outlets and social media goes black—and before the clouds on the horizon turn orange.

Now, two months later, there are twenty survivors holed up at the hotel, a place already tainted by its strange history of suicides and murders. Those who can’t bear to stay commit suicide or wander off into the woods. Jon and the others try to maintain some semblance of civilization. But when the water pressure disappears, and Jon and a crew of survivors investigate the hotel’s water tanks, they are shocked to discover the body of a young girl.

As supplies dwindle and tensions rise, Jon becomes obsessed with investigating the death of the little girl as a way to cling to his own humanity. Yet the real question remains: can he afford to lose his mind in this hotel, or should he take his chances in the outside world? - from Goodreads

Part post-apocalyptic survival story, part murder mystery, The Last was an incredible read!  Jon is a historian attending a conference at a hotel in Switzerland when suddenly nuclear bombs start dropping all over the world.  With little access to the outside world, he and a couple dozen others decide to stay put at the hotel, but their plans for survival are thrown when they discover a body in the hotel's water tank.

The book starts off as Jon's diary, and you can feel his despair and tension.  Then, his training kicks in and he switches to a narrative, with a somewhat more objective tone.  I liked that he wanted to leave this record of what happened and who they were.  The premise felt completely believable, and there were some interesting discussions between the characters as to how the nuclear war came about and whose fault it was.

The mix of a post-apocalyptic story and a murder mystery was an intriguing combination, although the story was less of a thriller than I expected.  The author did a good job incorporating survival tactics, as the guests try to ration and collect food for the winter and also make scouting trips for supplies.  As part of his narrative and also his attempt to solve the murder, Jon spends portions of the book interviewing the guests and hotel employees.  At times those parts felt a bit slow.  I also wondered how reliable of a narrator Jon was, as he dabbles in drugs and alcohol and grapples with feelings of how they were all somehow fated to be at this hotel at what could be the end of the world.  He is also worrying about the family he left behind in San Francisco.

I wasn't super-crazy about the end of the story.  I understood how it fit in with the rest of the book as far as narrative, but it seemed to be kind of a reach and the tone felt a bit off.  Overall, though, I enjoyed this unique approach to an end-of-the-world story.