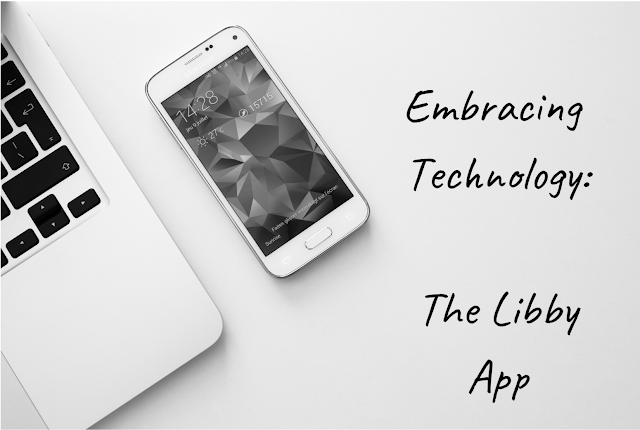 Confession: I'm not a tech fiend.  I can barely operate our DVD player.  I got my first smartphone less than a year ago.  And I've said multiple times here on the blog that I don't do ebooks (although I did read my first one earlier this year).  However, sometimes it's good to get outside your comfort zone, and recently I did just that!

To set the stage: I started a new job earlier this year and now have a proper hour-long lunch break.  I've been bringing the unread physical books from my shelves to read during lunch (goals!).  I was driving to work one day a couple weeks ago when it hit me - I forgot to put a new book in my bag after I finished one the day before!  I literally groaned - what would I do for a whole HOUR?  Was there a bookstore or county library branch nearby that I could hit up? Then, I remembered something I had seen a few times on the library's website - they utilize the Libby app to allow patrons to download ebooks and audiobooks.  I had never thought about using it before, but now, I was kind of desperate.  I worried, though, that it would be too tech-y and difficult for me to figure out, and I would give up.

Within two minutes, I had downloaded the app, chosen my library, entered my library card number, and was searching for available books!  I chose Kingdom of the Blind by Louise Penny, the latest installment in the Inspector Gamache series that I'd been wanting to read for awhile.  I downloaded it and fairly quickly learned how to open, navigate, and bookmark.

The purpose of this post isn't to introduce you to the Libby app or be a how-to guide - it's been around for awhile and I'm sure a lot of you are already using it!  Really, it's more of a personal post.  Too often I'm afraid to try new things, because of either frustration (that it will be too hard for me to figure out) or embarrassment (that I won't get it right away).  I avoided apps like Libby even though it could be really helpful.  I carry a book most places I go, but they get heavy and clunky.  This app ensures that I have a book at all times, because my phone is basically glued to my hand these days. I guess what I'm trying to say is that I'm glad I tried something new and pushed myself outside of my paper book comfort zone!  I learned that sometimes things are not as difficult as you fear they will be.


Do you use the Libby app?  What are some bookish things you've tried that you once thought you never would?
Posted by Angela at 3:00 AM