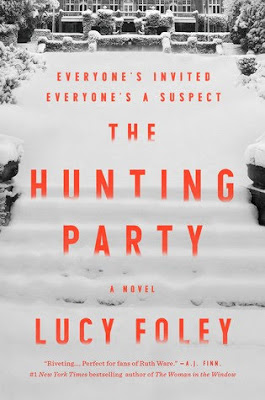 
For fans of Ruth Ware and Tana French, a shivery, atmospheric, page-turning novel of psychological suspense in the tradition of Agatha Christie, in which a group of old college friends are snowed in at a hunting lodge . . . and murder and mayhem ensue.

All of them are friends. One of them is a killer.

During the languid days of the Christmas break, a group of thirtysomething friends from Oxford meet to welcome in the New Year together, a tradition they began as students ten years ago. For this vacation, they’ve chosen an idyllic and isolated estate in the Scottish Highlands—the perfect place to get away and unwind by themselves.

They arrive on December 30th, just before a historic blizzard seals the lodge off from the outside world.

Two days later, on New Year’s Day, one of them is dead.

The trip began innocently enough: admiring the stunning if foreboding scenery, champagne in front of a crackling fire, and reminiscences about the past. But after a decade, the weight of secret resentments has grown too heavy for the group’s tenuous nostalgia to bear. Amid the boisterous revelry of New Year’s Eve, the cord holding them together snaps.

Keep your friends close, the old adage goes. But just how close is too close? - from Goodreads

Every year a group of old college friends plans a vacation together - this year, they're spending New Year's Eve at a lodge in the Scottish Highlands.  However, one of them won't make it out alive.

I enjoy mysteries like this, where the suspect pool is really limited and you're just trying to figure out who's lying or hiding something.  Foley takes it one step further in this book - although we find out that someone has been murdered in the first chapter, it's not until almost halfway through that we even find out the gender of the deceased and their identity isn't revealed until near the end.  So, the reader is trying to figure out which one of the group of friends could be a murderer while also trying to determine which of them is actually killed!

There are many POVs throughout the story, all women with the exception of one.  I don't mind books with lots of character POVs; I think it helps give a well-rounded picture.  Here, I was able to get to know some characters very well, but unfortunately others got lost in the shuffle.  I had to remind myself who some of the characters were because they showed up so infrequently.  However, the author injected a lot of interesting dynamics in the many friendships and relationships among the group.  These people, who have been friends for years, know each other so well and there's lots of history there, both good and bad.  But there's also any element of, how well can you really know anyone?

The book was a quick read - short, snappy chapters kept the action moving.  There were lots of red herrings that kept me guessing.  Several times I thought I had figured it out, but I was always wrong!  The reveal of the killer was spectacular and a total surprise - both the identity of the killer and the reasoning behind it were not what I was expecting at all!