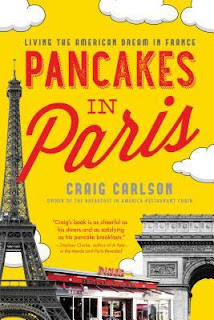 Pancakes in Paris: Living the American Dream in France by Craig Carlson (2016)

Thank you to Emma at Words and Peace for the recommendation!

Craig Carlson fell in love with Paris at a young age, and after pursuing a career as a screenwriter, he decided to switch paths and open an American-style diner in Paris, serving up the types of dishes that he felt were the only things missing from his beloved city.

This memoir is a perfect reminder that with enough persistence and determination, you can make practically any dream come true.  Craig Carlson had never worked in a restaurant or owned a business, yet his dream was to open a restaurant - in Paris, no less, and a diner, a concept which didn't even exist there.  I think he was very honest with the myriad of problems he faced - from raising money, to getting a loan, to finding a space, to dealing with terrible employees.  It's hard enough opening a business in your own country, let alone one where you don't know how the banking system or employment laws work.  Craig pretty much had to learn everything the hard way!

I enjoyed Craig's writing - it's down-to-earth and very relatable.  I think at times he could be a bit melodramatic, and it seemed that for all the problems he had, he also had many "lucky breaks" - it was kind of amazing how many times the exact thing he needed showed up at the exact moment he needed it.  But, his love for his dream and business always shone through, as well as his love for France.  If I ever make it to Paris, I will definitely check out his diner!  4 stars 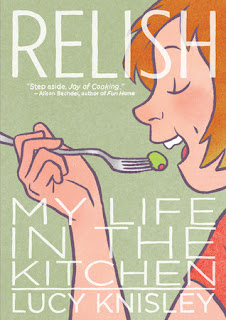 In this graphic novel/memoir, Lucy Knisley takes readers on a journey through her lifelong love of food.

I didn't realize that this book was basically going to be a comic.  I thought it was going to be a regular memoir with some illustrations, but the graphic novel approach worked here.  The stories were simply told, and the pictures added fun context.  As someone who has a lot of beloved memories that revolve around food, I really identified with Lucy.  I loved reading about her helping her parents in the kitchen as a child and trips that helped open up her eyes to foreign cuisines.  She also passes along some of her favorite recipes.

I think this could be a good book to read with children, although the chapter about a Mexican vacation had some elements that may not be appropriate for young ears/eyes.  4 stars

Thank you to Stacked for the recommendation during last year's Nonfiction November!
Posted by Angela at 3:00 AM