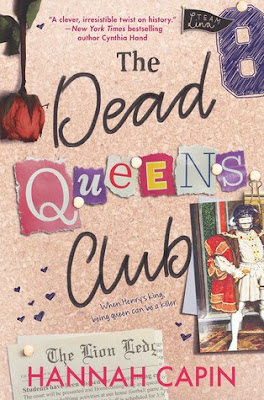 
Mean Girls meets The Tudors in Hannah Capin’s The Dead Queens Club, a clever contemporary YA retelling of Henry VIII and his wives (or, in this case, his high school girlfriends). Told from the perspective of Annie Marck (“Cleves”), a 17-year-old aspiring journalist from Cleveland who meets Henry at summer camp, The Dead Queens Club is a fun, snarky read that provides great historical detail in an accessible way for teens while giving the infamous tale of Henry VIII its own unique spin.

What do a future ambassador, an overly ambitious Francophile, a hospital-volunteering Girl Scout, the new girl from Cleveland, the junior cheer captain, and the vice president of the debate club have in common? It sounds like the ridiculously long lead-up to an astoundingly absurd punchline, right? Except it’s not. Well, unless my life is the joke, which is kind of starting to look like a possibility given how beyond soap opera it’s been since I moved to Lancaster. But anyway, here’s your answer: we’ve all had the questionable privilege of going out with Lancaster High School’s de facto king. Otherwise known as my best friend. Otherwise known as the reason I’ve already helped steal a car, a jet ski, and one hundred spray-painted water bottles when it’s not even Christmas break yet. Otherwise known as Henry. Jersey number 8.

Meet Cleves. Girlfriend number four and the narrator of The Dead Queens Club, a young adult retelling of Henry VIII and his six wives. Cleves is the only girlfriend to come out of her relationship with Henry unscathed—but most breakups are messy, right? And sometimes tragic accidents happen…twice… - from Goodreads

The Tudor era is one of my favorite historical eras to read about, both fiction and nonfiction, so when I heard about a modern retelling of Henry VIII and his six wives, set in high school, I knew I had to read it.  In The Dead Queens Club, Hannah Capin has captured the spirits of the original historical figures with a whole new dose of drama.

Undoubtedly, the reign of Henry VIII was marked by personal, political, and religious upheaval, but turning him into a high school golden boy who can't keep a relationship is kind of ingenious (not to make light of history, particularly since he had two of his wives executed).  The Henry of this story is athletic, smart, and charming - everyone loves him.  He's not perfect, though.  He has a wicked temper, and he can't stand the thought of any of his girlfriends cheating on him; it's almost instant grounds for a break-up (but he can cheat on them - hypocrite).  But now that two of his exes have died, is it impossible to believe that he had something to do with it?

Our narrator is Annie/girlfriend #4/"Cleves," who is Henry's best friend.  Although she loves to write and has grand ideas for the school paper, she's not very ambitious and has no idea what she's going to do when she graduates.  She could be frustrating because she obviously still has feelings for Henry and defends him almost to a fault - she never wants to believe anything bad about him.

Running through the story is the mystery of what happened to Anna Boleyn, who died in a fiery explosion on prom night.  Did she really set it all up?  Was she trying to kill Henry?  There were so many rumors and stories, it was hard to know who and what to believe.

The writing and dialogue are snappy and keep the story moving, although the pacing wasn't always the best.  I don't know if it's my age, but at times the writing felt a little too clever and full of slang; there were parts I had to read a couple times just to understand what the characters were saying.  Also, there is A LOT of slut-shaming, with Anna Boleyn and Katie Howard taking the brunt of it.  Such unnecessary malice, although I liked the way Cleves took a stand against it.