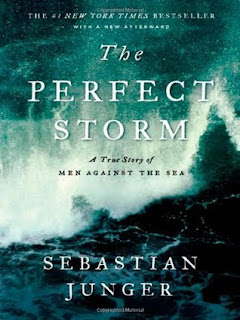 The Perfect Storm by Sebastian Junger (1997)

In The Perfect Storm, Sebastian Junger recounts a massive storm that hit the Atlantic in October of 1991 and the lives it affected.  I remember watching the movie of the same name years ago, and so I wanted to read this book to help fill in the gaps.

Probably the most well-known fact about the storm, for me at least, is the loss of the fishing boat Andrea Gail and its crew.  Unfortunately, even with all the research in the world, no one will ever know what actually happened to them.  The men were out of radio contact for several days, and very little of the boat was ever found.  Junger can only speculate what the men's final hours were like.

However, that's not the only case he discusses in the book.  He goes into great detail about the lives of fishermen.  I really got a sense of how dangerous the work is, how transient their lifestyle can be, and, surprisingly, how often they have premonitions.  Junger also recounts several other sinkings and rescues during the storm.  He switches around between the different stories a lot, which sometimes got confusing with all the names, but it was still a fascinating and sometimes heartbreaking read.  4 stars 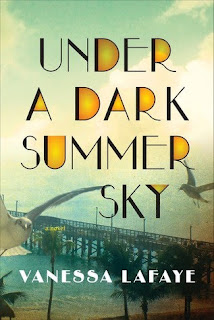 Under a Dark Summer Sky by Vanessa Lafaye (2015)

In Heron Key, Florida, already-strained tensions are put to the test when a local woman is beaten almost to death and a hurricane bears down on the community.

First off, I loved the setting of this book - Lafaye did such a great job bringing the beach town to life.  I could practically feel the humidity as I was reading.  The story takes places in 1935, and although the Depression didn't hit this area of the country as hard, the people still faced problems, which were exacerbated by an influx of WWI veterans (both white and black) who were brought in to work on public works projects.  The characters were very complex, and the racial tensions were evident in almost every social class.  Black veterans who were embraced by the Europeans during the war came back to a country that still treated them horribly.

The massive hurricane that strikes the town took up a large portion of the book, but I didn't mind.  I was practically on the edge of my seat, wanting to know who would make it through the storm.  Overall, this was a well-written and engaging story about love, family, and racism.  4 stars
Posted by Angela at 3:00 AM