Most likely inspired by Lin-Manuel Miranda's musical Hamilton storming onto Broadway, it seems like there have been a ton of Alexander Hamilton-related books published in the last couple years.  Even better, some of those have focused on his wife, Eliza Schuyler Hamilton (because we all know that too often the stories of women get overlooked).  I have three Hamilton books on my TBR, so I thought it would be fun to review a couple of them together (and for a really great review of yet another one, see Stephanie at Bookfever's review of My Dear Hamilton).  It's interesting how different authors can take the same characters and basic history and make it seem completely different.  I'll be honest, though - even though I love history, American history has never really been my strong suit, so I can't really speak fully to the historical accuracy of these books. 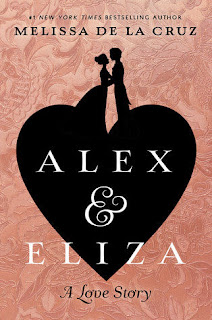 The first in a series, Alex & Eliza takes a look at the pair's inauspicious first meeting and journey up to the time they marry.

Eliza came across as a very practical, intelligent woman.  She really wanted to help the war effort, and she didn't like the idea of wearing fancy dresses or going to balls when soldiers were freezing and starving.  Even though he's a master of words, Alexander Hamilton was often (kind of adorably) flustered when he was around Eliza.  I liked seeing their relationship from both points of view, and especially how Eliza came around on Alexander after initially not liking him.

Eliza's family is very prominent, but Hamilton comes from practically nothing.  He knows on paper they wouldn't be a good match, and he's determined to better himself, just for her.  Speaking of Eliza's family, her sisters were forces to be reckoned with.  They were very fun side characters, and I liked watching both of them take control of their own lives.

This book had a very lighthearted, sometimes humorous feel.  Even situations that could have been deep or dark never felt that way.  If you're in the mood for a cheerful or fluffy historical fiction novel, you might enjoy this one.  3.5 stars 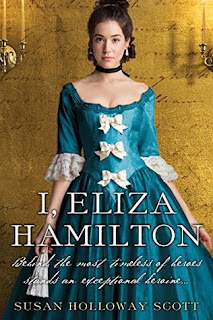 Eliza recounts her life with Alexander Hamilton, detailing their courtship and marriage, ending with his untimely death.

Although I enjoyed this book, I can't say I loved it.  The writing was good and very much evoked the time period, but it also felt dense and even dry at times.  Some parts felt like reading a textbook about the American Revolution and aftermath, so if you're really interested in learning all those little details, you'll appreciate this book.

I don't know that this book increased my opinion of either Eliza or Alexander Hamilton.  I don't doubt that he relied on her to listen to and help hone his many ideas, but at the same time, she admits she didn't have much education and could barely write letters to him when apart.  She sometimes came across as naive, boldly stating how happy and fortunate they were, how no two people had ever loved each other more, when there were clearly issues in their life together.  Even when other people try to warn her about things, she never wanted to believe it.  Hamilton, on the other hand, was ambitious almost to a fault.  I admire his desire to create a new working government, but he kind of came across as power-hungry and was so easily offended.  He also clearly kept a lot of secrets from Eliza, including their poor financial situation.  3.5 stars
Posted by Angela at 4:00 AM