Review: We Were On A Break 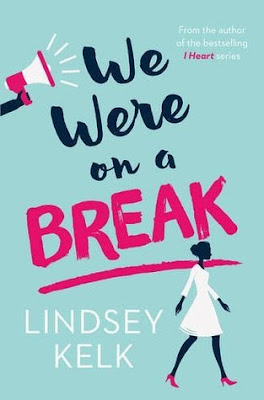 We Were On a Break
Lindsey Kelk
Published October 6, 2016


Is it a break? Or is it a blip? 'You've just had a holiday,' I pointed out, trying not to yawn. 'Wasn't that enough of a break?' 'I don't mean that kind of break.' There's nothing worse than the last day of holiday. Oh wait, there is. When what should have been a proposal turns into a break, Liv and Adam find themselves on opposite sides of the life they had mapped out. Friends and family all think they're crazy; Liv throws herself into work - animals are so much simpler than humans - and Adam tries to get himself out of the hole he's dug. But as the short break becomes a chasm, can they find a way back to each other? Most importantly, do they want to? - from Goodreads

I so badly wanted to love this book - the premise sounds so cute and realistic, but unfortunately this was just kind of a middling read for me.

Adam is planning to propose to Liv on the last day of their Mexican vacation, but when the plans get messed up and the two get into a fight on the plane ride home, Adam suddenly decides he needs a break from their three-year relationship.

I liked that Kelk gave both Adam and Liv first-person narratives in the book.  It was definitely a good strategy for this book; instead of getting just one person's side of the story, we were able to get into both of their heads (although, it would have been nice to have some kind of header or something indicating that the narrator was changing).  I liked Liv way more than I liked Adam.  I think Liv reacted to Adam's request for a break like many women would have.  She is stunned, she is confused, she has questions - but she thinks it might be better to stay silent than to push Adam.

Adam just frustrated me to no end.  He has no reasons for wanting a break; it just seemed like something that popped into his head and he ran with it.  I mean, he was literally saying just a few pages before how perfect Liv is - and now he needs space?  He tries to justify his actions to himself later, but his reasons don't make sense.  Then, he thinks he can just glibly apologize and all will be forgiven and forgotten.  Uh, no, Adam - when has a woman ever forgotten anything?

Adam's need for a break pushes Liv to then reassess her entire life, and this is the part of the book that I actually enjoyed.  Liv is a vet in her dad's practice, and he decides, without speaking to her first, that he's going to retire and leave the practice to her.  Now, Liv faces a future that's less focused on the animals she loves and more on the business side of the practice, something she hates - and her dad doesn't like the way she plans to run the business.  She has to decide if this is something she really wants.

The book was quite long for the premise, filled with miscommunications and misunderstandings and friends/siblings sticking their noses into other people's business.  I just wanted Liv and Adam to talk to each other, instead of dragging things out.  I also didn't care for the ending - things just wrapped up too neatly and unrealistically.