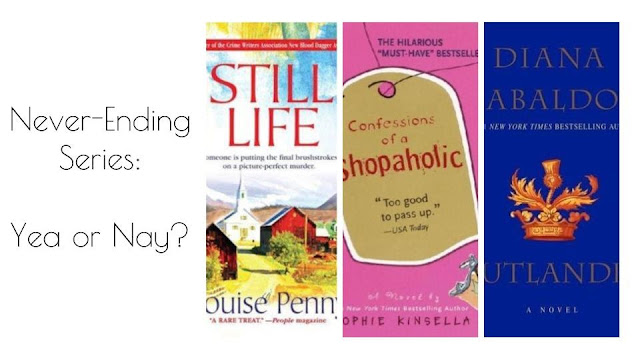 There are so many book trilogies and quartets out there.  But what about those series that just seem to go on forever?  There are lots of them, but here's three I've been reading:

Inspector Gamache by Louise Penny
This mystery series is currently at 13 books!  The books follow Chief Inspector Armand Gamache, head of the Quebec homicide division.  There is some carryover between the novels.  Many of the characters are the same, whether it is Gamache and his team or the residents of Three Pines, where many of the stories take place.  The books often refer back to events from previous installments, but for the most part, each mystery is its own.

Outlander by Diana Gabaldon
Outlander began as a time-traveling romance between Jamie and Claire in the Scottish Highlands and is at 8 books right now (although Gabaldon may be wrapping things up).  When I first started the series, I loved the premise and was looking forward to the love story and adventures in 18th century Scotland.  However, by the second book, practically everything had changed - from the time period to the location.  I kept reading even though it wasn't quite what I imagined anymore.  Over the course of several books, dozens of new characters have been added with new storylines in different times.  In addition, the tone of the books for has changed; it's less of a romance and more sweeping epic.

The Shopaholic series by Sophie Kinsella
The Shopaholic books are getting more outlandish as the series progresses.  At first, it was organic, following Becky as she met her husband, got married, went on honeymoon, and had a baby.  Although still entertaining, the later books are becoming more strained.

I have mixed feelings about never-ending series.  I think it works well with a mystery series; we get the comfort of the same characters but each book feels new.  With other types of series, it's interesting to see how the author will broaden the story, but it doesn't always work.  Sometimes it can feel forced, or it can just get overwhelming.  It makes me wonder what the endgame is, or if the author even has one in mind.

And then there's the commitment factor.  If you can get in at the beginning of the series, it's not so bad - but you may have to wait a long time, maybe even years, for the next installment.  Even for the most ardent fans, this is rough.  And if several books have already been published, it can be hard to make that decision to start such a lengthy series.


Do you read any series that just seem to go on and on?  Or do you avoid those kinds of series?  Why do you think they work, or not?