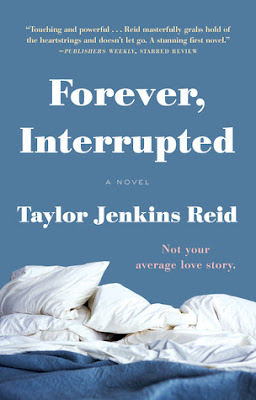 
Elsie Porter is an average twentysomething and yet what happens to her is anything but ordinary. On a rainy New Year's Day, she heads out to pick up a pizza for one. She isn't expecting to see anyone else in the shop, much less the adorable and charming Ben Ross. Their chemistry is instant and electric. Ben cannot even wait twenty-four hours before asking to see her again. Within weeks, the two are head over heels in love. By May, they've eloped.

Only nine days later, Ben is out riding his bike when he is hit by a truck and killed on impact. Elsie hears the sirens outside her apartment, but by the time she gets downstairs, he has already been whisked off to the emergency room. At the hospital, she must face Susan, the mother-in-law she has never met and who doesn't even know Elsie exists.

Interweaving Elsie and Ben's charmed romance with Elsie and Susan's healing process, Forever, Interrupted will remind you that there's more than one way to find a happy ending. - from Goodreads

I read Forever, Interrupted as part of the 2017 Backlist Reader Challenge; I know I said last month that I was going to do mini-reviews, but I loved this one so much, I wanted to do a full review.  I'd never heard of Taylor Jenkins Reid before I started blogging, and her name started popping up on tons of other blogs.  I wanted to give her books a try, and I was not disappointed with my first read!

Forever, Interrupted tells the story of Ben and Elsie, whose whirlwind romance is cut short when Ben is killed just days after their wedding.  Ben leaves behind Elsie and his mother, Susan, who have never even met but will somehow have to co-exist.

I loved Elsie as a character - she's such a relatable woman.  Before she meets Ben, her idea of a fun Saturday night is watching tv, reading, and eating pizza (pretty much my life).  She's just a regular girl living her life, and then she meets Ben.  Their relationship is kinda insta-lovey, but it works here.  It's grounded in reality - they spend a lot of time together, they have important conversations, they tell each other things they haven't told other people.  Just a few months after they meet, they've eloped.  I appreciate that the author didn't make their relationship perfect.  Although they are obviously happy and in love, they still fight and have issues; it made it much more believable.

I also loved Ben's mother, Susan.  I can understand her coldness at the beginning, but then she really comes around, because she and Elsie both loved Ben, and Susan is in the unfortunate position of also being a widow.  I loved her even more when we later learn how much she has helped Elsie despite her own secret feelings of intense grief.

The story moves back and forth between Ben and Elsie's relationship and the time after he has passed away.  I loved this approach because of how neatly the two stories fit together.  We immediately got to see connections that might have been lost had the story been told in a chronological manner.

The book brought up important questions about love and the length of relationships.  Is Elsie and Ben's relationship less important because they only knew each other for 6 months?  Should Elsie not be entitled to a long grieving period because she was only married for 9 days?  I don't think any of that matters - it's not about quantity, but quality.  Elsie and Ben probably felt more love and knew each other better than some people who have been together for years.  They really made the most of their time together.  And really, when you love someone, no amount of time is ever enough.

I did have a couple issues with this book.  First, I don't like to judge anyone's grieving process, because we all handle it differently, but Elsie could be quite mean at times, and I don't necessarily think it was fair, especially to her friend Ana.  Also, I don't agree with Ben not telling his mother about Elsie at all, even after they got married.  I realize it's the impetus for the story, but his reasons didn't make a whole lot of sense.  However, Elsie and Susan were able to overcome that and move forward together.