Inspired by Halloween, I've chosen a horror novel for this installment.  I read a lot of Stephen King novels as a teenager, but horror is not a genre I usually gravitate towards these days, probably because I'm a huge scaredy cat (I cover my eyes when I watch scary movies and peek out between my fingers).  I chose The Ruins (Scott Smith, 2006) because although it's classified as a horror novel, it's something different from the typical zombies, vampires, or ghosts. 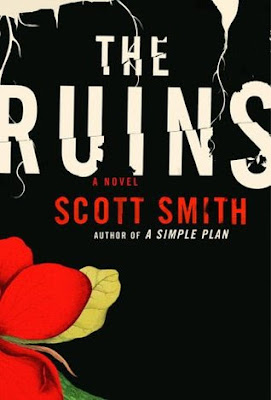 Trapped in the Mexican jungle, a group of friends stumble upon a creeping horror unlike anything they could ever imagine. Two young couples are on a lazy Mexican vacation–sun-drenched days, drunken nights, making friends with fellow tourists. When the brother of one of those friends disappears, they decide to venture into the jungle to look for him. What started out as a fun day-trip slowly spirals into a nightmare when they find an ancient ruins site . . . and the terrifying presence that lurks there. - from Goodreads

I actually really enjoyed this book!  Two American couples are vacationing in Mexico when they befriend a German tourist.  When the brother of the German tourist follows a woman into the jungle, he and the Americans (plus a Greek tourist they also met) decide to go find the brother, thinking they will only be gone a few hours.

Things start going wrong almost from the start.  Reliable transportation is iffy in this part of Mexico, and at first they have trouble finding the archaeological dig that the German tourist and woman were supposed to have gone to.  The group comes across a Mayan village, but not speaking the language, they have no way of communicating.  They find the dig site, on a hill, but no one is there.  They also realize the Mayans have followed them, armed with guns and bows, and aren't letting them leave.  And there's this plant, a vine really, covering the hill, and it totally isn't what it seems.

This book showcased horror and fear on a few different levels.  The first is being lost in another country.  The second is being trapped on this hill by the Mayans, with little in the way of food or water.  Although it seemed a bit extreme, one character thinks almost immediately that they could be stuck here for days or weeks and tries to come up with a survival strategy.  The third is the monster, which is this pervasive and deadly vine.  As the story goes on, the characters learn that this vine can burn with its sap; mimic sounds; create smells; and attack its victims.  Not your typical horror monster, but creepy nonetheless!

There's lots of gore, there's suspense, there's desperation, there's a bit of mystery - where did the vine come from, how did it get these supernatural powers, why don't the Mayans let anyone off the hill?  Is it some sort of sacrifice, an understanding with the vine?  Will anyone come looking for the tourists?  So many unanswered questions!  To prevent myself from having too many nightmares, I probably won't read much horror in the future, but it was definitely fun to read something like this at Halloween!
Posted by Angela at 7:00 AM

Email ThisBlogThis!Share to TwitterShare to FacebookShare to Pinterest
Labels: horror, Try it