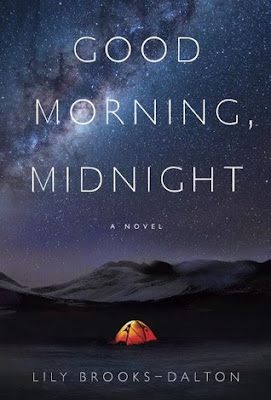 
Augustine, a brilliant, aging astronomer, is consumed by the stars. For years he has lived in remote outposts, studying the sky for evidence of how the universe began. At his latest posting, in a research center in the Arctic, news of a catastrophic event arrives. The scientists are forced to evacuate, but Augustine stubbornly refuses to abandon his work. Shortly after the others have gone, Augustine discovers a mysterious child, Iris, and realizes the airwaves have gone silent. They are alone.

At the same time, Mission Specialist Sullivan is aboard the Aether on its return flight from Jupiter. The astronauts are the first human beings to delve this deep into space, and Sully has made peace with the sacrifices required of her: a daughter left behind, a marriage ended. So far the journey has been a success, but when Mission Control falls inexplicably silent, Sully and her crew mates are forced to wonder if they will ever get home.

As Augustine and Sully each face an uncertain future against forbidding yet beautiful landscapes, their stories gradually intertwine in a profound and unexpected conclusion. In crystalline prose, Good Morning, Midnight poses the most important questions: What endures at the end of the world? How do we make sense of our lives? - from Goodreads

Good Morning, Midnight is not my typical kind of read - it's not historical fiction, a mystery/thriller, or chick lit.  It's more thought-provoking and less action-filled.  And I absolutely loved it.

Augustine is conducting research in the Artic when rumors of war reach his station.  While everyone else evacuates, he refuses to leave - he doesn't have a family to seek out or a permanent home to return to.  He thinks he is alone until he comes across a young girl, Iris.  He doesn't recognize her or know why she's there, but when no one returns for her, he realizes it is up to him to take care of her.

Sully and the rest of the Aether crew are returning from a mission on Jupiter when they lose all contact with Mission Control, with no warning.  As days turn into weeks and months, the crew begins to worry about what kind of home they are returning to.

The story is quiet, but powerful.  After a lifetime of pushing people away, Augustine now finds himself lonely, scanning radio waves for any signs of life.  Eventually he reaches Sully, as she and the rest of the crew are trying not to fall apart.  Although they only speak a few times, Augustine and Sully form a sort of friendship, and the connection between them is even deeper than they realize.  Although there is some focus on daily survival, the story is more contemplative, as Sully and Augustine think about the work they have devoted their lives to and the family Sully left behind.

Brooks-Dalton's writing is pure magic.  She creates vivid images of both the Artic and outer space, through lush descriptions.  As I was reading, I feared for Augustine and Sully - if some catastrophic event was happening on Earth, I think the last two places I would want to be would be alone in the Artic or hundreds of thousands of miles away in space, unable to reach anyone.  Augustine and Sully are brilliantly full characters - despite the short length of the novel, we get to know them so well.

5 stars: Not your typical "end-of-the-world" novel, this strong story will stay with you long after you're finished reading.
Posted by Angela at 8:00 AM