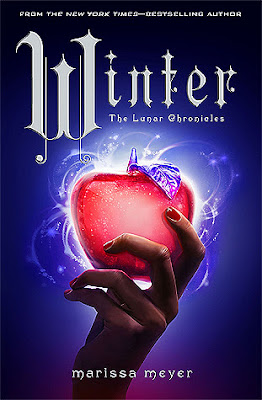 Winter (Book 4 of The Lunar Chronicles)


Princess Winter is admired by the Lunar people for her grace and kindness, and despite the scars that mar her face, her beauty is said to be even more breathtaking than that of her stepmother, Queen Levana.

Winter despises her stepmother, and knows Levana won’t approve of her feelings for her childhood friend—the handsome palace guard, Jacin. But Winter isn’t as weak as Levana believes her to be and she’s been undermining her stepmother’s wishes for years. Together with the cyborg mechanic, Cinder, and her allies, Winter might even have the power to launch a revolution and win a war that’s been raging for far too long.

Can Cinder, Scarlet, Cress, and Winter defeat Levana and find their happily ever afters? - from Goodreads

I loved this entire series, and this book was a fitting end.  I was drawn to The Lunar Chronicles series because each book is based on a fairy tale, but with a modern twist: Cinderella (Cinder) is a cyborg mechanic, Little Red Riding Hood (Scarlet) is a French farmer, Rapunzel (Cress) is a computer hacker, and Snow White (Winter) is a princess who lives on the moon.  The whole idea is so much fun and well thought out; Marissa Meyer has created a world that is rich and full of detail.

Although this last book is entitled "Winter" and does a great job of introducing us to this character, the book isn't just about her.  All of our favorite characters from the previous books are back and bringing their revolution to Luna.

There are a lot of main characters in this book, but Meyer excels at putting a spotlight on each and moving their stories along.  I love that each one has such a distinct personality; for example, Winter is mentally unstable but she will always be kind and Thorne will always have a sarcastic comment no matter the situation.  I really appreciated the strong female characters in this book, particularly Cinder and Scarlet; although each has their own romantic entanglement, they are still smart and focused on their mission.

The book literally ends with "And they all lived happily to the end of their days," but I felt that there were still some unanswered questions.  I don't think there's a need for another book to revisit the characters, though, and I actually liked that the ending wasn't traditionally perfect for all the characters.

4.5 stars - I recommend this book to readers who are charmed by fairy tales and happily ever afters!  Read the whole series, I know you will love it!
Posted by Angela at 8:00 AM