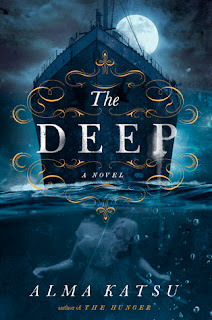 In 1912, Annie Hebbley is a stewardess on the Titanic; in the days before its tragic loss, she and other passengers experience some strange happenings.  In a dual timeline, it is 1916 and Annie crosses paths with other Titanic survivors aboard the hospital ship Britannic during WWI.

I loved how atmospheric this book felt.  Katsu does an incredible job of setting the scene aboard the Titanic, bringing together historical details and figures with an eerie feel that something isn't quite right aboard the ship.  Could something be calling from the ocean?  Could there be a demon among the passengers?  The supernatural elements didn't feel over the top.  The fact that Hebbley is quite the unreliable narrator only added to the mysterious feel.  Although I enjoyed Katsu's writing, my biggest issue with this book was the pacing.  I remember having a similar issue with her previous book, The Hunger.  It takes forever for the story to set up, and unfortunately the payoff came too little, too late.  By the time everything was explained, it felt both convoluted and rushed.  3 stars 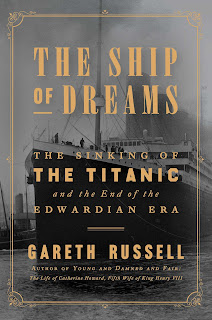 The Ship of Dreams: The Sinking of the Titanic and the End of the Edwardian Era by Gareth Russell (2019)

In The Ship of Dreams, Gareth Russell explores the tragic end of the Titanic through the stories of six passengers and posits that the disaster helped mark the end of the Edwardian era.

I have mixed feelings about this one.  On one hand, I don't think Russell proved at all that the sinking of the Titanic marked a major change in society.  Considering that WWI was only a few years away, changes were already happening in the world.  Although I enjoyed his writing, I though the formatting was challenging at times - the paragraphs were entirely too long and there was extraneous detail.  However, I love learning about the Titanic and even though some of the information I already knew, there were plenty of new things here, too.  I enjoyed the in-depth look at some of the passengers, especially ones I didn't really know about before, and Russell did a great job dispelling some common myths about the ship, as well.  His detailed description of the ship's last hours even brought me to tears a couple times, knowing how things would end for so many of the passengers.  4 stars
Posted by Angela at 3:00 AM