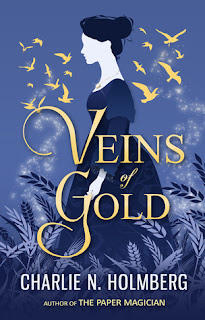 Gentry and her siblings are abandoned by their father, who heads to California to find fortune in the gold rush.  When strange natural phenomena begin occurring, Gentry is introduced to a world of magic by a beguiling stranger.

I really enjoyed this quiet, thoughtful book set in Utah during the 1850s (or, at least sometime during the gold rush, the book never actually specifies the date).  Holmberg did a beautiful job combining history and fantasy.  The struggles Gentry faces trying to keep her family afloat felt so real, and the magical realism added to the story.  The magic fueled by gold (and how the earth responds when too much is taken from it) was very imaginative.  There's also a sweet love story!  If you're looking for a lot of action, this probably isn't the book for you, though.  Like I said, it's a pretty quiet book, but Holmberg's writing is beautiful and the setting is not one I come across often.  4 stars 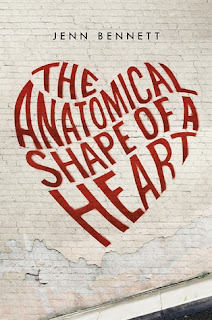 The Anatomical Shape of a Heart by Jenn Bennett (2015)

I've read a couple of Jenn Bennett's books before and really enjoyed them, but this one missed the mark for me.   Beatrix wants to be a medical illustrator and Jack is a graffiti artist - their connection is strong, but each has family issues that may get in the way of their happiness.

Is it weird to say I enjoyed everything but the main characters?  I felt like Bennett was trying too hard to create these quirky, interesting characters, and to me it felt insincere.  Beatrix felt like a stereotypical "artist," and Jack alternately seemed way too old and also very immature for his age.  Their insta-love never really grabbed me.  I was more interested in the family issues that each was facing.  The way Jack dealt with his sister's mental illness was so touching.  Beatrix was dealing with the fallout from her parents' divorce, and I liked that there ended up being more to that story than initially appeared.  I even think it could have been explored more; I still had questions after the story ended.  3 stars
Posted by Angela at 3:00 AM