I was lucky enough to win both of these books from Goodreads giveaways - here are two quick mini-reviews for them, both of which are scheduled to be released on June 16th! 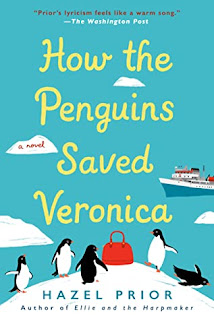 How The Penguins Saved Veronica by Hazel Prior

Veronica wants to leave her fortune to a group studying penguins in Antarctica, but she demands to visit and see their research first.  Around the same time, Veronica finds out that she has a long-lost grandson, Patrick.

This was such a charming and heartwarming story.  Veronica has not had an easy life - from her old diary entries, we find out what happened to her during WWII.  Now that she's 85 years old, she wants to do something good with the wealth she's amassed, and after seeing a documentary on TV, she decides that penguins are it.  Veronica can be prickly, stubborn, and too forward at times, but she knows what she wants and how to get things done.  I loved watching her interact with the scientists in Antarctica.  And when she decides to save an orphaned penguin, we see a whole other side of her.  As much as I adored Veronica,  I wasn't sure about her grandson Patrick at first.  He didn't seem to have much ambition, but I enjoyed his growth over the story and how the two managed to overcome their first impressions of each other.  A lovely story about family! 4 stars 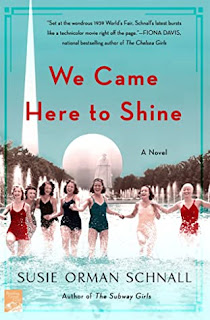 We Came Here to Shine by Susie Orman Schnall

We Came Here to Shine follows two young women working at the 1939 World's Fair in New York City.  Vivi is an actress who is now performing in the synchronized swimming show, and Max is a journalism student working at the fair's paper.

First off, I loved the setting of the World's Fair.  The scale and the wonder of the fair both came through really well.  Vivi and Max were interesting characters and had a lot in common - both were strong women whose livelihoods unfortunately were dependent on the men around them, which was typical for the time period.  I think Vivi handled herself much better - she made the best of bad situations.  Max, however, was too impulsive and angry, constantly trying to find ways to make herself seen.  I know the way she was treated was unfair, but she didn't really help herself, either.  The decisions made by both of them near the end of the story seemed a little implausible and nonsensical, though.  The random third person omniscient POV was a little jarring at times, but overall the writing was good.  3.5 stars
Posted by Angela at 3:00 AM