"Try it, you might like it" - it's what someone says when they present you with some food you've never had before or your mom wants you to try on some clothes she picked out for you.  I'm using it here on the blog as inspiration to choose books in genres I don't normally read; to branch out from my reading comfort zones; and to maybe find some new favorites!  One of my goals this year was to bring this feature back, so here we go! 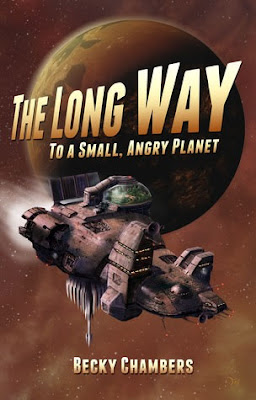 I read a lot of books set in space, but I've never read a space opera, so I thought it would be a great genre to try.  So, what is a space opera?  According to Wikipedia, a space opera "is a subgenre of science fiction that emphasizes space warfare, melodramatic adventure, interplanetary battles, chivalric romance, and risk-taking. Set mainly or entirely in outer space, it usually involves conflict between opponents possessing advanced abilities, futuristic weapons, and other sophisticated technology."  A classic example of a space opera movie would be Star Wars.

The first book that came to mind was The Long Way to a Small Angry Planet by Becky Chambers (2014).  I have Greg at Book Haven to thank for this because he has mentioned this book several times!  I'm so glad I finally listened to him, because I really enjoyed this book!

Most of the books I read about space are pretty limited to humans doing exploration of some kind or maybe starting a new civilization on a distant planet because Earth is no longer inhabitable.  This book, however, is set on a bigger scale - in the future, humans have colonized Mars and Earth is a distant memory.  Humans aren't the only beings in the universe, either - there are countless races of aliens, and by this point, many have learned to co-exist.  That brings us to the crew of the Wayfarer - a motley mix of humans and aliens who live and work together.  It was so interesting to learn about the different alien cultures and backstories for all the crew members.  Becky Chambers is so creative and inventive - each character felt well-rounded and fleshed out.

The main storyline deals with the crew being hired for a tunneling job out in deep space, potentially dangerous but very lucrative.  We follow the crew as they get ready for the job; at some points the story felt a little slow, but it was also a good chance to introduce us to the characters and be immersed in the world-building.  The action starts building up near the end, and the story has a bit of an open ending that makes me want to continue the series and learn more about this world!


What's your favorite space opera?
Posted by Angela at 3:00 AM

Email ThisBlogThis!Share to TwitterShare to FacebookShare to Pinterest
Labels: space opera, Try it