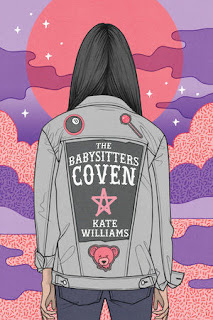 The Babysitter's Coven by Kate Williams (2019)

Buffy the Vampire Slayer meets The Babysitter's Club in this fun story about two teenage girls who realize they're witches that need to protect the world from danger.

Esme and her best friend Janis formed a babysitter's club years ago, and now the new girl in school, Cassandra, wants to join.  Strange things seem to be happening around Esme, but maybe Cassandra can help explain them.  The girls discover that they are witches, and they'll have to learn quick because something evil is coming.

I wanted to like this book more, although it was a fun and cute story.  At the beginning, I was a little thrown off by Esme's "voice" - I'll admit, I haven't been a teenager in a long time, but I felt like the author didn't really capture the teenage feel very well.  It felt like how an adult thinks teenagers talk - or maybe kids today really do just talk in acronyms?  It smoothed out as the book went on, though.  The pacing was a little off, too.  It took a long time for the action to start, and then there wasn't really enough of it.   However, this is the first book in a series, and I'm interested to see where the story goes next, because there were some good threads that were introduced - the potential is definitely there.  I especially liked the storyline with Esme's mother.  It was also fun seeing the girls learn to use their powers and perform spells.  3.5 stars 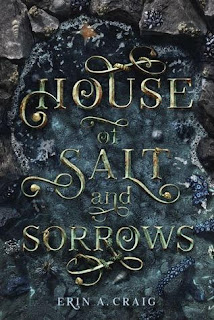 A retelling of "The Twelve Dancing Princesses," House of Salt and Sorrows tells the story of Annaleigh, one of twelve daughters of a duke of an island in the sea.   When we meet Annaleigh, four of her sisters have died, and she begins to wonder if something sinister is at work.

This book was the creepy story I was looking for this fall.  At turns gory, eerie, and spooky, it didn't shy away from the darkness, but rather embraced it and made it a part of the story.  I appreciated that the author wasn't afraid to push boundaries.  Annaleigh was a bit of unreliable narrator - she was haunted by ghostly visions and seemed convinced that at least one of her sisters had been murdered, although no one else seems to believe her.  The sheer amount of sister characters was overwhelming at times and only a couple of them really stood out to me, but I thought the author did a good job of creating a sense of unease and fear in the girls, especially as they are convinced that they're cursed and doomed to die early deaths.  As the story goes on, a few twists are revealed, and although I didn't really expect the religious aspects, I liked the way the story played out.  If you're looking for an atmospheric retelling, this is it!  4 stars
Posted by Angela at 3:00 AM