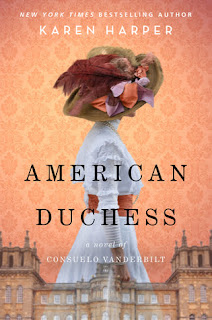 Consuelo Vanderbilt, of the famous Vanderbilt family, is forced into a marriage with an English duke by her mother - however, she won't let an unhappy marriage define her.

I am fascinated by the families of the Gilded Age - the wealth beyond belief, the spectacular homes, the extravagant parties - and Consuelo is the perfect example of daughters of the time period.  Even though her marriage to the Duke of Marlborough wasn't a love match, Consuelo found ways to enrich her life.   I admired her charitable spirit and how she helped, often hands-on, the people of her husband's estate and neighboring village.  She also wasn't afraid to divorce her husband, knowing that it might wreck her socially, although it took over 20 years of marriage, more than half of them separated, to do so.  After that, it really seemed that Consuelo started her second act, much happier and finally marrying for love.

The book was an easy, quick read, although the language and dialogue didn't feel particularly indicative of the era; at times it almost felt thoroughly modern.  While it was interesting to learn about Consuelo's life, it wasn't altogether riveting, although the last section of the book, set during World War II, did ramp up the action.  Apparently, Consuelo was on the Nazi ransom list and had to continue moving about to avoid kidnapping!  4 stars 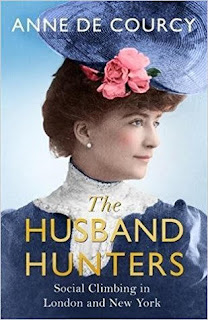 At the end of the 19th century and into the 20th century, an interesting social phenomena was occurring - American heiresses began marrying into the British upper class at a high rate.  Who were these women, and why was the British aristocracy opening itself up to an American invasion?

Anne de Courcy tackles this interesting subject in The Husband Hunters, but I can't say it was a total success for me, unfortunately.  I enjoyed learning about the individual American women, and I thought de Courcy did a great job delving into the reasons why these marriages occurred.  Some were love matches, but more were marriages of convenience.  Some American women wanted a title and others used the marriages to raise the social status of their families.  For the British men, the money these women brought to the unions helped save family estates, but there was also the allure of these "foreign" brides, so different from the women they had grown up with.  However, there were a lot of names to keep track of and the non-linear structure of the book was often hard to follow.  Also, for a short book, there was a lot of extraneous material.  I wanted more about the lives of these "American Duchesses" in England and less about their families in America and how much money they were spending on things such as lavish parties.  3.5 stars
Posted by Angela at 3:00 AM