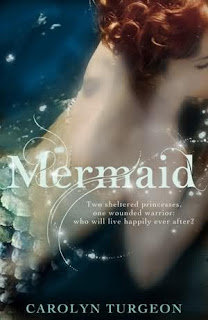 A retelling of the classic Little Mermaid story that stays very close to the original fairytale, Mermaid is the story of Lenia, who rescues Prince Christopher from his sinking ship.  She leaves him in the care of Princess Margrethe, who she believes to be a nun at a nearby convent.  Margrethe and Christopher's kingdoms are at war, but she believes she can heal the rift by marrying him.  However, Lenia also goes to great lengths to get back to the man she rescued and has fallen in love with.

I didn't expect that this "retelling" would be so close to the original classic fairytale; there were only a few slight changes.  However, I think those changes were enough to make it feel new.  The story had a moody and gothic feel, which I loved; this wasn't the happy, music-filled Disney story from my childhood (although I love that one, too!).  It didn't shy away from pain and sadness.

Although I didn't really care for the prince, I enjoyed the relationship between Margrethe and Lenia.  I was rooting for both of them, although I didn't know how they could both "win" - they were rivals, but there was no villain here.  Lenia was fighting for her life and salvation, and Margrethe was fighting to save the people of her kingdom.  4 stars 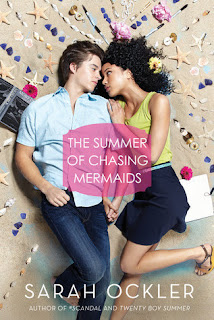 The Summer of Chasing Mermaids by Sarah Ockler (2015)

After an accident in her native Tobago leaves her without a voice, Elyse flees to Oregon with friends.  She spends the summer falling in love with Christian and trying to recover from her accident.

I think this is going to be a case of "it's me, not you."  This book has such good reviews on Goodreads, so I was excited to read it, but unfortunately I wasn't wowed by it.  The writing got very poetic and lyrical at times, which isn't my favorite kind of writing.  The pacing felt very slow, and the book felt so long.  It didn't seem like a whole lot happened for the page count.  I couldn't really get behind Christian as a character; although we are told many times he is a player, when he meets Elyse he seems to fall for her and become devoted very quickly, so those things seemed at odds.  Elyse's accident is teased throughout the whole book, and we finally find out what happened near the very end.  I wish we had found out sooner, especially since it involved her twin sister and was the reason she left the island.  The payoff wasn't enough.

However, I did like Elyse's growth throughout the book.  Her accident caused her to become very withdrawn, but she slowly realized that even though she lost her voice, she didn't have to lose herself.  She comes out of her shell as the book goes on.  I also liked her girlfriends; they seemed very fun and supportive.  The small-town Oregon setting was so lovely and atmospheric, and it made me want to visit this little beach community.  3 stars