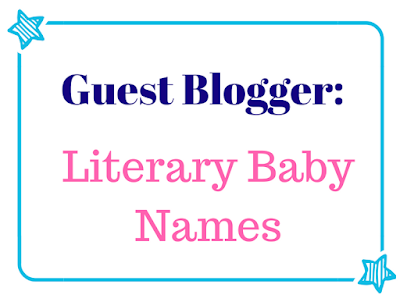 Today I am so happy to have my sister Michele as a guest blogger - I thought it would be fun for her to share the story of how she and her husband came up with their daughter's name!

Naming your new baby is one of the most important and nerve-wracking decisions of early parenthood. Strong contenders must work for a toddler and for your future lawyer/doctor/computer engineer. You may want something unique, but you don’t want family and friends to say “What were they thinking?” behind your back. Inspiration can come from anywhere, and it probably won’t surprise readers of this blog to know that ours came from literature.

When we found out we were expecting a baby girl, we put our thinking caps on. My husband wanted something a little different, so we scoured baby name sites. We could not agree on anything!  One weekend we were watching a Harry Potter movie marathon on TV. As a joke, I suggested the name Luna to my husband, since he was always making comments about how Luna Lovegood is the character he would most like to be friends with.

To my chagrin, he loved it.  At first, I was worried it was a little too different and that people would think it was weird.  However, when I thought about the character who inspired it, I began to fall in love. Luna Lovegood is such an amazing character in the Harry Potter books.  She is quirky and dreamy, but also brave, confident, loyal, and intelligent. These are all qualities that I hope my Luna exhibits one day.


Let the Scarletts, Atticus’s and Lunas of the world unite! Do you know anyone who has drawn inspiration from literature to name their little one?