Review: A Lady's Guide to Selling Out 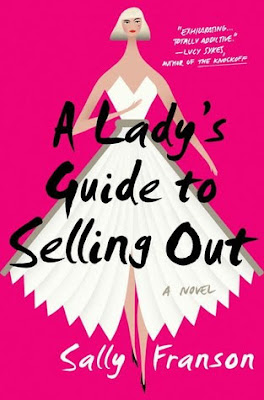 A Lady's Guide to Selling Out
Sally Franson
Published April 10, 2018


A brilliant young woman navigates a tricky twenty-first-century career—and the trickier question of who she wants to be—in this savagely wise debut novel in the tradition of The Devil Wears Prada.

Casey Pendergast is losing her way. Once a book-loving English major, Casey lands a job at a top ad agency that highly values her ability to tell a good story. Her best friend thinks she’s a sellout, but Casey tells herself that she’s just paying the bills—and she can’t help that she has champagne taste.

When her hard-to-please boss assigns her to a top-secret campaign that pairs literary authors with corporations hungry for upmarket cachet, Casey is both excited and skeptical. But as she crisscrosses America, wooing her former idols, she’s shocked at how quickly they compromise their integrity: A short-story writer leaves academia to craft campaigns for a plus-size clothing chain, a reclusive nature writer signs away her life’s work to a manufacturer of granola bars.

When she falls in love with one of her authors, Casey can no longer ignore her own nagging doubts about the human cost of her success. By the time the year’s biggest book festival rolls around in Las Vegas, it will take every ounce of Casey’s moxie to undo the damage—and, hopefully, save her own soul.

Told in an unforgettable voice, with razor-sharp observations about everything from feminism to pop culture to social media, A Lady’s Guide to Selling Out is the story of a young woman untangling the contradictions of our era and trying to escape the rat race—by any means necessary. - from Goodreads

I have to admit, although I was interested by the blurb, the cover is really what drew me to this book.  I loved the hot pink and the fun typography.  Unfortunately, that wasn't enough to save this book for me.

Casey is a top performer at an advertising agency when her boss approaches her to work on a new project: recruiting authors and writers to become spokespeople and content creators for companies and brands in need of some good PR or new ideas.  The authors generally sign on rather quickly, but Casey begins to feel uncomfortable with the campaigns, worrying that these literary idols of hers are "selling out."  Combined with a fragile romance with one of her recruits and a fracture in the relationship with her best friend, Casey reaches her breaking point.

I had some major issues with this book:
But, there were some things I liked:
2.5 stars
Posted by Angela at 5:00 AM