Review: As You Wish 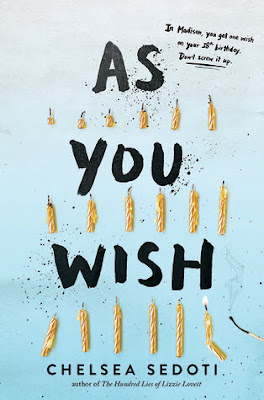 
What if you could ask for anything- and get it?

In the sandy Mojave Desert, Madison is a small town on the road between nothing and nowhere. But Eldon wouldn’t want to live anywhere else, because in Madison, everyone gets one wish—and that wish always comes true.

Some people wish for money, some people wish for love, but Eldon has seen how wishes have broken the people around him. And with the lives of his family and friends in chaos, he’s left with more questions than answers. Can he make their lives better? How can he be happy if the people around him aren’t? And what hope is there for any of them if happiness isn’t an achievable dream? Doubts build, leading Eldon to a more outlandish and scary thought: maybe you can’t wish for happiness…maybe, just maybe, you have to make it for yourself. - from Goodreads

Imagine that on your 18th birthday, you could enter a magical cave and wish for practically anything you wanted (because, rules) and you would get it.  Money, beauty, athletic prowess, a new pair of shoes - whatever.  What would you wish for?  As You Wish takes a look at a town where practically anything is possible, through the eyes of Eldon Wilkes, who is about to turn 18 and get his wish.

Eldon is not the most likable of main characters - he's kind of a jerk, used to getting his way, popular and a great football player.  Until everyone in his class starts making their wishes, and suddenly he finds himself at the back of the pack. Unfortunately, he's also dealing with his sister Ebba's accident, which has left her brain-dead.  His mother is pressuring him to use his wish for money, so they can get Ebba better care, but Eldon knows nothing will help his sister at this point.  But he still has to make a wish, so he decides to start talking to other people around town about their wishes - and the consequences.

The premise is so interesting - what may seem to be a good wish at 18 may not pan out the way you hope in 10, 15, or 50 years.  It seems like practically everyone regrets their wish.  And honestly, some of the wishes seem so unfair - there's a rule that you can't affect the world at large (i.e. you can't wish for world peace), but it doesn't prevent you from affecting the life of another individual.  Eldon's mother used her wish to gain the love of Eldon's father, who was never interested in her - now he's forced to love someone he wouldn't even have given the time of day to.

The story was more melancholy than I expected and even had some controversial topics - suicide, wishing away homosexual feelings, and religion.  I appreciated that what could have been a light-hearted book actually had a lot of depth.  Although the book was quite long, it never felt that way.  I really couldn't put it down; I wanted to know what Eldon's wish would be.  Although the main character was believable as a 17-year-old boy, I thought there was maybe a bit too much cursing, and I still have mixed feelings about the ending.